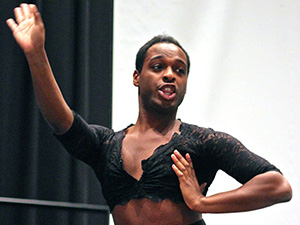 Bryan Rodriguez- Saringo, vice-president of LGBTQA, and Star Spencer hosted this year’s “T is not Silent” talent show where students joined together to perform an array of poetry, cover songs, and an urban/vogue dance tribute in the Northridge Center.

“The main purpose of TAW is to promote trans awareness and also to celebrate the lives of our siblings who do identify with trans development,” said Rodriguez- Saringo. “The transgender community is many more times likely to be bullied as part of the LGBT community.”

Starting off the night citing an original poem, Timothy Nang, 20, a sophomore in humanities, decided to share a powerful and personal story, his goal to bring more awareness to the transgender community.

“I wasn’t intending on performing but after seeing the trans day remembrance, it really spoke to me,” said Nang.  “I was at a point in my life in high school where I wanted to take my own life. Other people need to know that they should never give up. I felt I needed to speak up.”

Though heartfelt feelings and thoughts were interwoven through different performances, spirits were still high as performers continued to take the stage. The crowd was attentive and students stayed well past when the event was over to mingle with other students.

“This was a very informative and well-planned event,” said Marina Teo, a 23-year-old graduate student. “I came last year and this years’ turnout is way better. I like seeing that everybody is getting more involved.

Concluding the night with a surprise and anticipated final act, Cadence Valentine, 33, a Pride Center mentor, shared an emotional story about her transgender experience. The crowd was attentive and after, an eruption of applause and cheers were spread throughout the room.

“Everyone needs to know a story like this,” said Spencer. “That even through all this oppression, all this struggle and fight, you can still be yourself and find love.”