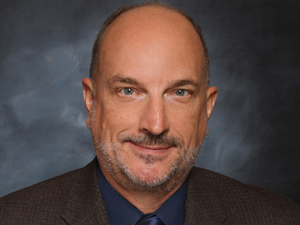 On a typical Wednesday afternoon, Steven Stepanek was in his office at the Computer Science department when he received a not-so-typical phone call.

It was Jerry Brown, governor of California.

The two talked for about 10 minutes about the status of higher education in the state, but Stepanek was hit with a surprise when they finished talking.

“At the end of the conversation (I could tell that) he kind of turns his head (and) tells the person sitting next to him, ‘OK he’s it,’” Stepanek recalled. “I’d just been interviewed, that’s how I got notified of my appointment.”

On Oct. 23, Stepanek was named a faculty member of the CSU Board of Trustees and the first CSUN professor to be given that position.

The faculty trustee position is a two-year term of office, but Stepanek will serve six fewer months due to Brown not making his appointment back in May, when the position is normally filled.

After months of waiting, Stepanek was glad when Brown finally chose a candidate.

“I was as much relieved that he simply had made a decision,” Stepanek said. “The problem for both of the applicants — the two finalists — is that we have been trying to plan our lives while not knowing that, at any point, this sort of phone call could occur.”

Stepanek also applied for the trustee position three years ago. During that time, he was also among the final two candidates, but was not selected.

“I initially debated a little bit with myself, ‘Do I want to put my name up again or not?’ I decided, why not?” Stepanek said.

Stepanek is currently chair of the Computer Science Department and faculty president of CSUN. He has been part of the university in some fashion for about 40 years, starting as an undergraduate mathematics major before eventually becoming a professor and advancing to his current positions.

“I’ve kind of seen many of these different angles of CSUN over this particular period of time,” Stepanek said.

Stepenak will have to step down from his duties as department chair and faculty president in order to devote all of his time to the board.

Talar Alexanian, journalism major, was appointed to the Board of Trustees in September of this year as a student trustee. Alexanian and Stepanek are the first CSUN student-faculty tandem to be appointed to the board.

Stepanek recently attended his first BOT meeting, something he had not done in person yet. He said he listened to audio of the meetings while doing other tasks in the past.

“I had a little bit of an idea of what was going on, but it is very different when you’re actually there in person, obviously,” Stepanek said. “There was still very much a lot to learn, but it more or less went as I anticipated the structure was going to (be).”

Harold Hellenbrand, provost and vice president for academic affairs, felt that Brown’s appointment of Stepanek to the board was appropriate.

“I thought it was a very smart move because he’s very knowledgeable of the CSUs since he’s been in it for so long,” said Hellenbrand, who has worked with Stepanek for the last seven years. “He knows it about as well as anybody.”

Hellenbrand feels Stepanek will have his work cut for him with the other board members.

“I think the biggest challenge will be dealing with people’s fixed opinions,” he said. “I think that some of the board members come in with mixed views of higher education. They just assume they know how it works. Getting them to understand that it doesn’t work the way they pre-perceive it will be the biggest challenge.”

Hellenbrand also said Stepanek’s personality will do him good in terms of working with his new colleagues.

“He’s very diplomatic, very polite, but very smart in what he says,” Hellenbrand said. “So I think his style is what will work him to the greatest advantage on the board.”

After 40 years of service to the university, Stepanek said retirement is one of many options going forward, but he is keeping his future open-ended for the time being.

“As long as I am faculty trustee, I am definitely not retiring,” Stepanek said. “So we’ll continue forward from here and see what I’m going to do after that.”