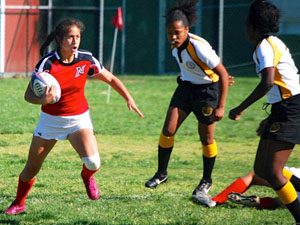 When Yesenia Camacho, 21, accidentally missed the tryouts for soccer, she thought she would have to wait until next season to try out, which meant waiting another year.

Fortunately for Camacho, a close friend noticed her desire and talent to play sports and introduced her to rugby, a sport that entails a combination of soccer, football and tackling.

“I think the tackling part was what caught my attention. Growing up in Los Angeles, you don’t hear (of) too many people playing rugby, or women’s rugby,” Camacho said.

Eager to learn how to play, the sociology major tried out of CSUN’s Women’s Rugby Club her junior year, working hard to learn the rules and techniques of the game.

“It’s not an easy sport to play,” Camacho said. “It’s really intense and you have to think quickly for your next move, always preparing for something to change.”

Managing her time wisely, Camacho splits her time working two jobs, being a full-time student, showing up for rugby practice and squeezing time in for food and naps. Camacho claims that one of the appeals of playing sports is time-management.

“Its tough but it keeps me on track. I have no time to slack off,” Camacho said. “I eat in-between classes and jobs, and take 10 minute naps whenever I can.”

The support she receives from her family is comforting even though, at the beginning, her mother was terrified of the idea of her only daughter playing such an extreme sport. Serious injuries are known to occur, but Camacho convinced her it wasn’t as intense as rugby has been portrayed to be.

“I’ve gotten bruises and some scars on my leg,” Camacho said. “But I’ve never had a concussion or torn my ACL (a ligament of the knee).”

Stereotypically, women’s rugby has been known to include some large stature women who might join the sport to let out their aggression. For CSUN, the women’s rugby team defies that norm.

“We have a lot of smaller girls on our team,” said Camacho. “Sometimes that can be intimidating because other schools might have bigger girls, but we focus on the game and our team really supports each other.”

This past year’s team has only known each other for only a year, but the teammates regard each other as family. One of Camacho’s closest friends and fellow teammate, Lupe Moreno, 20, art major, connected the first time they met.

“I was holding the punching bag (during practice), and she didn’t know where to hit, and she hit me in the face.” Moreno states. “Ever since then we just clicked and it has worked out. We support each other and we’re like sisters.”

Now entering her senior year, Camacho has high hopes for her and the team. Last year, the CSUN women’s rugby team beat out Division I schools such as Berkeley and Arizona State.

“CSUN is the underdog. No one expected us to win,” Camacho said. “Many of the girls on the team have never even played before and we beat UCR (University of California Riverside).”

This year, the CSUN ladies strive to be number one in regionals. For Camacho, it’s another challenge she’s willing to take with the help and support of her family-like teammates.