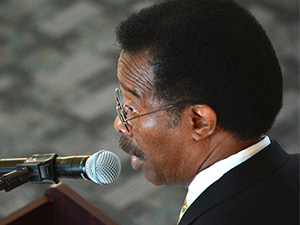 >>>CORRECTION: A final decision has not yet been made regarding the use of the Oviatt Lawn. Seats will be added to accommodate guests but it won’t be 500,000 as stated in the article.

CSUN commencement ceremonies are about to get a little complicated due to new regulations proposed by President Dianne F. Harrison.

According to Watkins, President Harrison requested that CSUN have smaller ceremonies where graduating students will only be allowed to invite four guests to attend.

“(In the past) we dealt with the issue of large amounts of guests attending the ceremony, we’ve had really large turnouts and essentially resulted in limited admission, “ said Watkins.

During the last commencement ceremony there were 5,000 guests standing because the school was unable to accommodate the seating for those guests, according to Watkins. In an effort to resolve this problem, 500,000 seats have been added in order to accommodate the guests at future ceremonies.

As reported by the Daily Sundial, CSUN is among the last of the CSUs to initiate a ticketing system for graduation.

“There probably will not be more than two (extra) tickets per graduate, ” said Watkins.

Watkins said he encourages guests to carpool to the ceremony because only two parking permits will be given to each student.

Watkins said there is a positive side to all of these changes, one in particular being that each college will still have their own separate ceremony.

“Names will continue to be called and students individually recognized, each college will still have their own commencement, ” Watkins said.

While tickets are free many members of the A.S. board were not happy with the changes.

“If a student wants to attend another student’s ceremony would they still need a ticket?” asked Upper Division Senator Jesus Martinez-Ramirez.

Watkins explained that even though you are a student, when attending another student’s commencement you would still be considered a guest and would therefore still need a ticket.

Social and Behavioral Sciences Senator Adriana Santos was concerned that she wouldn’t have the chance to meet with fellow students for photographs after the ceremony. Watkins explained that while the graduation will be closed off during the ceremony, those gates will be opened once the ceremony ends.

Santos said that students should have been notified of these changes more in advance.

“For those of us coming from larger families or first generation college students, our families have been talking about coming to graduation since last summer…I wish we could have been told sooner, ” said Santos.

A.S. Vice President Talar Alexanian also had concerns of guests needing to get out of their seats to use the restroom since it is a three hour ceremony.

“Once we get that finalized we will have to sit and decide how to manage that, we can’t say to guests to limit their coffee or water intake,” said Watkins.

A.S. President Christopher Woolett gave the board some words of encouragement to help them see things more positively.

“I think we all know that change is hard, I hope that we can re-evaluate our way of thinking and be more positive,” Woolett said.