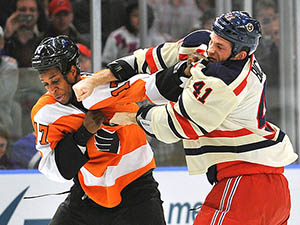 Overtime,  playoffs and fighting were among the hot button issues discussed by NHL General Managers at their annual meeting in Toronto on Tuesday.

With more and more games decided by shootouts, a new divisional realignment, and the re-emergence of goalie fighting, hockey fans across the nation can expect an array of changes forthcoming to their beloved sport.

As exciting as shootouts are, most GMs across the league agree that they don’t want the outcome of games decided by individual players, especially with playoffs at stake. Forty of the season’s first 262 games have been determined by shootouts, creating havoc among teams fighting for positioning.

Extending overtime to 10 minutes instead of five and adopting a three-on-three format–rather than the four-on-four in place today were some of the ideas thrown around. Ken Holland of the Detroit Red Wings was in favor of keeping overtime as it is with the addition of another five minute period of three-on-three before the shootout.

Lou Lamoriello of the New Jersey Devils, proposed that teams switch ends of the ice after the third, making it more difficult for them to change lines (the intent being that tired players would lead to more scoring). Although no definitive changes were made on Tuesday, overtime as we know it can become history when the GM’s reconvene in March.

This year both the Eastern and Western Conferences saw major changes to their respective divisions with the realignment. The Detroit Red Wings, a perennial force in the west in previous years, crossed over to the Eastern Conference along with the Columbus Blue Jackets, while the Winnipeg Jets moved west.

According to the NHL, these changes were made to allow teams to play the majority of their games against teams in the same time zone, ensuring that all 30 teams play in all 30 venues at least once per season. In addition to the new four division format, the NHL adopted a wild-card playoff system similar to the NFL’s.

Managers debated whether it was fair for teams to cross divisions and vie for playoff contention, as it’s possible for one division to send five teams to the postseason while the other sends three – the top three teams in each division qualify, while the remaining two spots are filled by the next two highest seeds regardless of division. Depending on what happens this year, reverting back to the old, six division format can become a legit possibility.

Recently, the NHL has suffered severe scrutiny for one of the most intricate aspects of its sport: fighting. Debate over whether a rigorous punishment should be implemented on goalies that leave the crease to start a fight has been a popular topic in the league ever since Ray Emery of the Philadelphia Flyers pummeled his unwilling combatant, Braden Holtby of the Washington Capitals.

Currently, the NHL doesn’t have a rule in place regarding goalie fights (aside from the five minute major) and thus Emery was not disciplined. The general consensus among GMs seems to be that a lengthy suspension is reasonable punishment for goalies who decide to drop the gloves.

By reprimanding goalies who engage in physical combat, those epic showdowns of the 90s, such as brawls between Patrick Roy and Chris Osgood could become a thing of the past.

Beware purist hockey fans, the impending GM meeting in March could change the layout of the NHL for years to come.