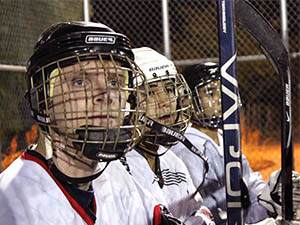 With no head coach, no home rink, and very few players returning to the team, the CSUN Roller Hockey Club was left in shambles heading into the 2013-2014 season.

Coming off a 2012 campaign that saw the Matadors finish 8th out of the nine teams in the Western Collegiate Roller Hockey League (WCRHL), the highest finish in CSUN history, the outlook for the club looked bleak at best.

This disorganized and leaderless team was revitalized in the off-season thanks in large to the efforts of team president William Cornell with vice president and assistant captain, James Jewett.

The first order of business for Cornell and Jewett, two of the team’s six returnees, was to find a head coach.

“I knew James from the past and my brother (Alex) goes here and also plays on the team, so that started the channels of communication and through some discussions I found out they needed a coach, so I volunteered and here I am,” said Weinstein.

Though this is Weinstein’s first year as a coach, his broad experience as a player and extensive knowledge of the game made him the ideal candidate for the job.

In terms of developing the team from a coaching standpoint, Weinstein plans on instituting some of the psychological techniques he teaches to help his players become more mentally prepared.

“I need to come up with a much more solid game plan and structure,” said Weinstein. “I also need to do a better job of getting us more mentally prepared. I want to start implementing some sports psychological techniques that I use to try to get people fired up.”

Weinstein is confident his team can turn the ship and improve collectively, as long as his players continue showing dedication and determination.

The next step for the team was finding a local rink to play on.

Dorfman, an avid fan of all things hockey, agreed to help out his Alma mater by allowing the team to practice on his facility.

“(Dorfman) was all about helping out CSUN, he’s an alumni and we worked out a deal with him and started skating on the rink,” said Jewett.

With the acquisitions of a new coach and rink, Jewett and Cornell focused their efforts on recruitment.

Both players wanted to establish a new brand of hockey, separate from the lethargic, languid ideology seen in previous years.

“The biggest challenge (in previous years) was commitment,” said Cornell. “We get a group of guys in the beginning super excited and then we lose four games, we get blown out and everyone disappears—there’s no more team, that’s been the philosophy: if we don’t start out strong there’s no hope, so we don’t even play anymore.”

First year player Cody Chase was among the prospects they targeted.

Although he is optimistic the Matadors can achieve their first postseason berth, he acknowledges that the team is still working to become a cohesive unit.

“I’d say our biggest weakness is our time together–we hardly know each other, I just met these guys a couple of months ago, and it shows in our play that were not used to each other yet. We still need time,” said Chase.

After starting the season 1-7, the Matadors will try to compile a series of wins in their next three tournaments in Santa Barbara, Hamilton City and Huntington Beach to get back on track.

The unanimous goal for this year’s team is to make the playoffs for the first time.

“We want to make the postseason,” said Jewett. “That’s never happened before, so I would love to do it for the first time and be in the front office when it happens.”

In order to help the club garner more publicity and attention, the players understand that they need to establish a winning culture.

Weinstein is hopeful that with a good season, his team will see an increase of awareness on campus in the next couple of years.

“I’m hoping (the club is) still around (in the next couple of years) and it just gets better and better. I know there are players here (at CSUN) who play roller hockey and are really good that aren’t playing on this team, so I’m hoping that if we establish a good season, that years to come they will start playing.”