University Ambassadors serve as the face of CSUN 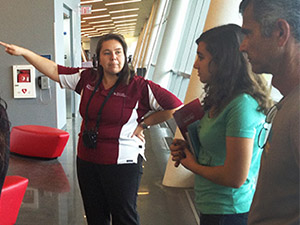 For over 15,000 prospective students each year, University Ambassadors make up the face of the campus by showing potential Matadors around CSUN.

University Ambassadors join the organization voluntarily, but they are given priority registration and textbook discounts. However, as Peer Sangngern, a CSUN ambassador and biotechnology major, and some other ambassadors explained, the group is like a second family for them, and they claim to have gained priceless connections around campus.

“Thankfully I got in… it’s been an amazing experience ever since. I would see the ambassadors walking around all the time, but I had never actually been on (a tour) here. After getting involved with the school you find out it has so much to offer you,” said Sangngern.

Ambassador Juan Carlos Cortez, junior in mechanical engineering, said: “I almost wish we could give campus tours to current students just to show them all the things they didn’t know.”

“The ambassador really has to be motivated and encouraging and just make the student feel comfortable in helping them find their niche on campus and… getting them to feel welcomed. That’s what I love about ambassadors,” Martinez said.

Since there is such diversity in the majors of the various ambassadors, they try to pair the ambassadors appropriately with their groups. Mercedes Ramos, a kinesiology major, recently led a tour on, in which two of the four students were interested in studying kinesiology.

Ramos provided specific information about kinesiology as she showed visitors a pool where the students from that department were assisting the elderly in aquatic exercises.

While tailoring the tour to the needs of prospective students, Ramos was sure to show off the new and improved Oviatt Library. Ramos showed the students all of the computers they would have access to, explaining there are even more areas on campus to use computers in case the library is full.

“What I love is the surprised look on their face where we’ve been walking for a good amount of time and I tell them ‘Alright that’s only half of the school, are you guys ready for the next half? Then they give me this wide-eyed look like ‘the campus is this big?’” said Sangngern.

A popular question according to Martinez is regarding safety.

Ramos stopped by one of the blue emergency poles and demonstrated how to use them. She explained that students can also call the Matador Patrol at any time from dusk to 11 p.m. for a campus escort, adding that they ensure you are inside your car before they leave.

Martinez explained that some groups come with a list of questions and others just let it all sink in. She said some popular questions are about graduation requirements and what there is to do for fun in the area.

Most who attend these tours are high school students, but there are often large groups of middle school students or even younger who participate in the tour. For the younger students, the tours are more about just getting the idea of college as an option instilled in their heads.

“Visiting the different places and seeing actual college students at the gym, the indoor tracks and stuff, it made me want to come here. (Ramos) knew what she was talking about and she answered a lot of our questions well,” said Sakoiya Fletcher from Westchester High School.

Nikkie Vamiro, also from Westchester, said: “It made me more interested in the field I want to do, and it really motivated me to actually want to come here.”