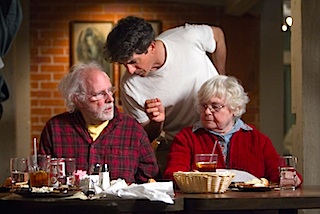 It only seemed inevitable that director Alexander Payne would pay homage to his beloved home state of Nebraska by naming one of his films after it. His film credits brim with love for the state, so much so that he has shot and set three of his six films there, just don’t ask him why he keeps coming back.

“No one else is doing it to speak of and I’m from there. You wouldn’t ask William Faulkner why do you continue to write in Oxford, Mississippi? Somehow where you’re from has an amazing gravitational pull over your life.  Not for everyone, but for many people.  And I have found myself with that condition.”

Unlike most directors who live and work in Los Angeles, Payne lives, and if the story calls for it, works out of Nebraska. Shooting “Nebraska” gave him the opportunity to further explore the state. After spending a year and clocking 20,000 miles on his car scouting locations, he happened upon pockets of areas he had never visited, let alone heard of, and finally settled on a few small locales that make up the film’s mythical town of Hawthorne.

It must have been fate that the screenplay, written by Nebraska native Bob Nelson, landed on Payne’s lap nine years ago after he completed “Sideways.” But not wanting to repeat himself by making back-to-back films about “two guys in a car”, as he jokingly calls it, he decided to put “Nebraska” on hold.

“I thought, well, let me make something else and I’ll circle around to ‘Nebraska.’” That something else turned out to be “The Descendants,” starring George Clooney, which earned him his second Oscar and his highest grossing film to date.

While “Sideways” and “Nebraska” like other Payne films, share certain stylistic elements, the addition of a ‘road trip’ is the only true thread binding them together. Beyond that they couldn’t be any more different.

“Sideways” captures the life-changing weekend of two friends who embark on a wine-tasting adventure through Santa Barbara. “Nebraska” on the other hand pairs veteran actor Bruce Dern and SNL alum Will Forte as father and son, Woody and David Grant, who set out on a road trip to retrieve the prize money for a sweepstakes Woody believes he’s won.

Where “Sideways” summer setting was engulfed by Santa Barbara’s wine country, as is its backdrop, Payne’s “Nebraska” is set against a cold mid-western winter of crisp broken leaves and captured in black and white.

“When I first read the script nine years ago, I imagined it only in black and white. It’s a beautiful form. It might be a format which is so old that it’s actually new again and kind of exciting.”

This embrace of black and white is a far cry from the trend of Hollywood, which is bent on making bigger budgeted films in the ubiquitous 3-D format. Yet, even with the film industry pushing towards the digital age, Payne is cool and confident about his prospects.

“It’s kind of the same. I mean my job is technology-proof.  Regardless of film or digital, my job is still what’s the story?  Who are the actors?  Where do the actors stand?  What’s the length of the lens?  What’s the design of the shot?  All of that remains exactly the same.”

And although “Nebraska” wasn’t written by Payne, it is very much a Payne film and carries, what he acknowledges, are sensibilities that have evolved into his trademarks of carefully balanced comedic drama focused on the lead character’s self-realization after experiencing something of a mid-life crisis.

As for Payne’s own self-realization, when asked about how what type of director he wants to be remembered for, he responds with a modest “ I hope in maybe future films I will have other attributes as well but…that wouldn’t be for me to say.”