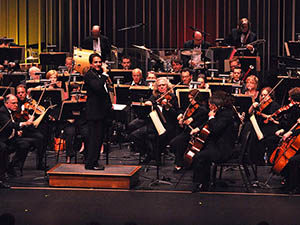 Often referred to as “America’s Orchestra,” the world famous Boston Pops surprised first-time listeners at the VPAC last Thursday by mixing a variety of musical styles for an enjoyable evening.  Audience members were taken back in time with iconic pieces including “Rhapsody in Blue,” “Stars and Stripes Forever” and then brought up to the present with “Hedwig’s Theme” from Harry Potter.  Queen’s “Bohemian Rhapsody” and ABBA’s “Dancing Queen” delighted the VPAC crowd and further proved that the Boston Pops can play just about anything.

Conductor Keith Lockhart spoke with the Daily Sundial prior to the Boston Pops’ VPAC performance discussing his beginnings with the Pops and studying piano at age 7.

Daily Sundial:  “I read in your bio that both of your parents were computer technicians.  What motivated you to begin studying piano at age 7?”

Keith Lockhart:  “My parents were both depression era babies.  They set me up for piano lessons and it stuck.”

DS:  “How did the opportunity to become the music director and principal conductor of the Boston Pops come about?”

KL:  “I was 33 when they started looking at me.  I was 35 when they picked me.  The orchestra has not had that much turnover.  They sent some people out to look at me and they liked what they saw.”

DS:  “How do you go about choosing material for performances and approximately how long does the orchestra spend learning a new piece?”

KL:  “We really play a huge, wide range of music.  On this tour we are doing the ‘Very Best of the Boston Pops.’  It’s intended to show range.  We have a new arrangement of ‘Dancing Queen,’  music of John Williams, Celtic music and a unique arrangement of ‘Bohemian Rhapsody.’  When learning a new piece we sometimes have a couple rehearsals.”

KL:  “There’s a lot more social media activity today.  Our recordings these days sell as much with downloads.  At the end of the day we are a live performing ensemble.”

DS:  “How do you balance your busy schedule of conducting the Boston Pops and playing guest dates with other artists?”

KL:  “It’s pretty busy.  With the Pops our busy months are May, June up to the fourth of July.  I try to spend as much time with my family as possible.”

DS:  “Over the years you have been in various conducting roles.  What are some unique qualities that you see with the Boston Pops Orchestra over other orchestras that you have conducted?”

KL:  “This orchestra is one of the most visceral groups of musicians.  They can play about anything.”

DS:  “If there is one golden nugget of information that you wish someone shared with you when you became involved in the music industry, what is it?”

KL:  “Keep your mind focused as broadly as possible.”

DS:  “What can audience members look forward to with your upcoming performance at Cal State Northridge’s Valley Performing Arts Center?”

KL:  “A great orchestra.  Everything from 19th Century Czech Masters to ‘Bohemian Rhapsody.’  There’s an audience sing-along in this concert.  It’s very inclusive.”