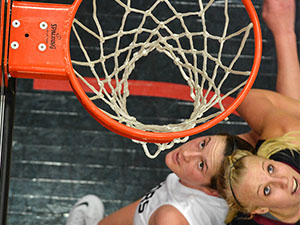 Junior guard Ashlee Guay led CSUN with 17 points and six assists and junior guard Cinnamon Lister chipped in 11 points on 4-12 shooting. Senior center Ruta Zurauskyte had 13 points on 5-7 shooting off the bench for the Broncos.

The Broncos late rally started with a layup by sophomore guard-forward Katie Hawkins and an elbow jumper by senior forward Arteivia Lilomaiava to pull Santa Clara within three.

After two Santa Clara free throws, CSUN had three chances to score on the same possession, but were unable to do so. On the next Santa Clara possession, Hawkins used a strong post move to score a basket, got fouled and completed the and-one, giving the Broncos the lead.

“Down the stretch, we didn’t make shots,” head coach Brandon Flowers said. “They made shots, we turned the ball over and they made plays. When you do that, the other team deserves to win.”

Junior guard Janae Sharpe was able to tie the game at 61 with two free throws of her own, but those would be the last CSUN points of the night.

With 48 seconds left, junior guard Nini Gilday scored to put the Broncos up two. On their next possession, freshman guard Montana Walters dribbled at the top of the key and calmly drilled a three-point dagger to ice the game.

“I was thinking, ‘Oh she’s not going to make this,’” Lister said of Walters’ three. “And then she made it.”

“We just started making silly mistakes that we shouldn’t have made,” Guay said. “We needed to play our game and there were key possessions that we lost [the ball]. That’s what ended up in the result of the game.”

The Matadors shot only 3-21 from downtown, but Flowers seemed unconcerned with the low three-point shooting percentage, pointing instead to defense and turnovers as reasons for the loss.

“I thought we got a lot of open looks and didn’t make shots,” Flowers said. “Obviously, there’s going to be nights when you’re not making shots. But when those nights come, you gotta make sure that you are taking care of the basketball and you are playing defense. We didn’t do either one of those down the stretch.”

One bright spot for the Matadors was the play of senior forward Mikayla Thielges, who had 10 points, seven rebounds and didn’t miss from the field. It was the first game this season Thielges scored in double figures.

“She’s a great kid,” Flowers said of Thielges. “She works her tail off, she does what she’s asked, or she tries do it to the best of her ability, which is [all] any coach can ask. Because of that, she gets production. She’s been a pleasure to coach and she’s consistently shown up every day.”

The Matadors finish up the Radisson Hotel Chatsworth Thanksgiving Basketball Classic with a home game against the Utah State Aggies Saturday at 5 p.m. in the Matadome.