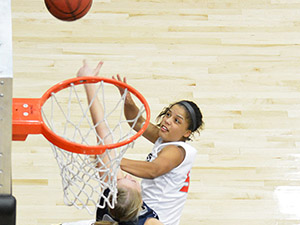 The Matadors (2-5) were blitzed by a huge run for a second straight game and fell to the Utah State Aggies (5-1) 75-67 on Saturday night.

CSUN held their biggest lead of the game when junior guard Janae Sharpe scored a layup in traffic after almost fumbling away the ball, putting the Matadors up eight with 13:43 left in the first half. But the Aggies put together a 19-2 run in the next seven minutes and never looked back.

Junior guard Cinnamon Lister led Northridge in scoring with 18 points on 6-16 shooting while junior center Camille Mahlknecht notched her first double-double of the season with 11 points and 12 rebounds.

With the Aggies down six in the first half, Schlott drilled a step-back three, pulling them to within three. Then sophomore guard Makenlee Williams decided to join the three-point party and knocked down two straight bombs from downtown, giving Utah State a 27-24 lead.

CSUN could not do much to stop the Aggies after that, only scoring seven points the rest of the period. The Matadors trailed the Aggies 45-31 at the half.

“There was a progression of different players assigned to [Schlott] in our man-to-man defense, and she got comfortable early and she played like she was comfortable,” head coach Brandon Flowers said. “She was the major factor in the first half as far as their offense and being successful on that end.”

Sophomore center Bernadette Fong felt a lack of execution contributed to the first half woes for the Matadors.

“I just felt like maybe we should have just pushed harder earlier instead of waiting,” said Fong, who finished with 12 points and 10 rebounds, the first double-double of her career. “We had a game plan when we came, and we just didn’t execute it as early as we should’ve.”

The second half started with a three-point shot by junior guard Ashlee Guay, who scored all of her 14 points in the second half, which cut the Aggie lead to 11. But Utah State blew open the game with a 9-2 run that resulted in a 54-36 Utah State lead with 15:33 left in the contest.

But CSUN would not go quietly into the night. Guay knocked down one of her four second-half three-pointers, igniting a 14-2 Matador run punctuated by a Fong putback off a Lister miss. Fong was fouled on the play and made the free throw, cutting the CSUN deficit to only six with 9:26 remaining.

“Bernadette has the ability to be very good for us,” Flowers said. “I think as this year has progressed and continues to progress, you’re going to see more and more out of her as far as what’s she’s able to do as far as rebounding the basketball and then scoring inside.”

After three Utah State free throws and another Guay three pointer, Schlott stole the ball and converted an easy layup. That started a 9-2 Utah State spurt capped off by five straight points from Williams and another layup by Schlott, sealing the win.

The Matadors struggled against Utah State’s aggressive trapping defense, committing 12 turnovers in the first half and 20 for the game. The Aggies ran at every possible opportunity as a result, scoring 17 fast break points to CSUN’s zero.

“Most, if not all, of [Utah State’s fast break points] came off of our turnovers,” Flowers said.

Mahlknecht thought her team was close to a come-from-behind victory.

“Honestly, I think we just ran out of time,” Mahlknecht said. “We were down at the start of the second half but I think we rallied and if there was a little more time on the clock, we would’ve come back.”

The Matadors took last place in the Radisson Hotel Chatsworth Thanksgiving Basketball Classic with Saturday’s loss. CSUN also lost their first game of the tournament Friday night against the Santa Clara Broncos, 66-61, after surrendering a 14-2 scoring run late in the game.