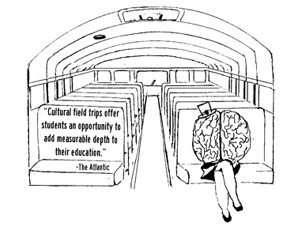 Having been a student in a university for four years now, I have had the opportunity to fully absorb a college education – along with everything that it entails.

Indisputably, since my transition from high school, I have grown immensely and have developed into a well-polished scholar, being exposed to the different curricula college has to offer.

Contrary to high school and middle school, which tend to offer a narrower approach to education, there are ample opportunities here at CSUN that cater to each student’s needs. However, despite the unique opportunities universities provide, there is one resource professors do not utilize as much as they ought to: class field trips.

As I reflect on my middle school and high school years, there is one factor that immediately stands out: the fun, adventurous, educational field trips we would take throughout the academic year.

Admittedly so, at that age, a field trip meant nothing more than an opportunity to convince my mom that I absolutely must purchase a Lunchable for the next day, meaning that the trip was viewed more as a jaunt that an educational opportunity, which provided a day away from the tedium of school.

Despite my immature approach and childish mindset at the time, I was still able to absorb the quality information field trips had to offer. Taking time off from the monotonous everyday routine, my mind suddenly opened to the possibilities of learning, as my classmates and I ventured through the foreign, exciting environment we were visiting.

There was something special about talking to real-life professionals who spent their lives studying what we were being taught in the classroom. Whether it was a trip with my science, history, or art class I recall being more attentive and enthusiastic during the outing than in class, eagerly awaiting to learn what the sites had to offer.

Studying from a textbook and listening to lectures is certainly one way of learning, but being able to examine with your own senses provides a much richer experience for a pupil; in addition, studies in psychology show that there is a better chance at retaining information when concrete and practical experience is incorporated.

Interestingly enough, according to an article published in “The Atlantic,” field trips offer students an important opportunity to “add measurable depth to their education,” especially to those students who struggle with the classroom setting.

As the article mentions, not every student particularly strives in the classroom, but including class outings approaches education at a different angle. Despite the reinforcing statistics, there has been a significant decline in school trips due to various budget cuts and state cut-backs.

Consequently, it has become a rare occurrence that professors make the effort to organize a school trip; however, I encourage professors to reevaluate their approach to teaching since it has been proven that education is much more effective when interlaced with real world experience.

Throughout my time here at CSUN, the opportunity for a class trip did not present itself until this semester, which came in my Italian-American Films course.

On Oct. 28, my classmates and I went to the Burbank Studios, where we sat in on Jay Leno’s “Tonight Show.” Despite the fact that we were not able to receive formal funding to provide transportation for this outing, students were willing to volunteer their cars to drive to the location, which displayed a genuine eagerness for the class outing.

For those of us in the class who are pursuing a career in the television industry, this experience afforded us the opportunity to learn first-hand the many different variables that go into the production of a show. Personally, being an avid viewer of movies and shows, I was absolutely baffled as I sat in the audience.

Even for those of us who are not in the CTVA field, it was a fruitful and unique experience to see the amount of preparation, personnel, diligence, and technology that was required for the production of the “Tonight Show.” Aside from the logistics of the show, it was a motivating experience to be exposed to such talent, such as Jay Leno and Adam Levine, who made guest appearances.

Following the show, we once again met as a class, but this time, at a genuine Italian restaurant located by the studios. In all of the films we watched throughout the semester, dining in communion was portrayed as one of the more prevalent traits of the Italian culture. Hence, being able to gather around the table with my professor, classmates and a plethora of Italian food, made the course study that much more palpable and tangible.

Upon returning to the classroom there was a much deeper appreciation for the material we were studying. Being able to experience the amount of effort that goes into production and dining as they do in Italy allowed me to develop a stronger connection to the class and everything it had to offer. It may take some additional effort to go on a class outing, but the juice is certainly worth the squeeze.