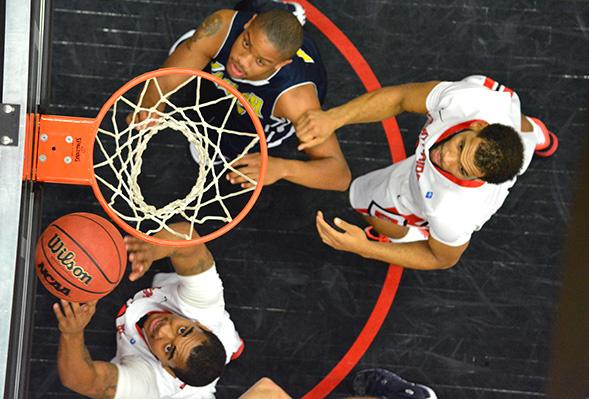 The Matadors (4-4) returned home from their four-game road trip and recorded a 97-79 victory over the La Sierra University Golden Eagles (2-8) to return back to .500 on the season.

After a lackluster first half, the Matadors took care of business in the second half and outscored the Eagles by 12 to secure the 18-point victory.

“The end results were really good,” head coach Reggie Theus said of his team’s performance. “I thought that us only being up by six at halftime was not acceptable. We should have been up significantly more against this team. But when all is said and done, we played well.”

The Matadors controlled the first half from the jump. They grabbed an early eight-point lead by dominating the glass with a 45-29 rebounding advantage.

The Golden Eagles’ head coach called a much-needed timeout, and the Eagles responded by climbing back into the game on an 11-5 run to cut the lead to one. Despite the spurt by La Sierra, the Matadors never surrendered the lead.

Maxwell was the game’s leading rebounder. He used his physicality to total 13 boards, seven on the offensive glass.

“It’s something I work hard on everyday,” Maxwell said of his rebounding. “I work hard in practice to rebound and it has been apart of my game my whole career.”

The game changed in the second half when CSUN’s sophomore forward Tre Hale-Edmerson blocked two consecutive shots, then ran down the floor and was fouled on a missed dunk attempt that got everybody out of their seats. From that point on, the intensity level set by CSUN never fluttered.

This spark energized the whole team as the defense picked up, and the following CSUN possession, senior guard Josh Greene converted a four-point play. He finished the game with 17 points on 5-8 shooting, 4-4 from behind the arc, and 3-3 from the free throw line.

The Golden Eagles had the game’s two leading scorers, guard Wolfgang Woods led all with 31, and Daveon Woods put in 21.

Theus acknowledged the accomplishment of his teams’ effort with these stats, but stressed four 50/50 balls his team did not come up with.

“All those statistics in all those places, we’re suppose to be up in those statistics,” Theus said. “But what we didn’t do is come up with the 50/50 balls, and that’s going to be detrimental to us down the stretch if we do not get better at (it).”

Theus stated that regardless of playing a tired La Sierra team, who played three games in four days, he is happy his team was able to get the win and return to a .500 winning percentage.

The Matadors have a chance to increase that number in their next game on Tuesday Nov. 3 against Southern Utah at home.