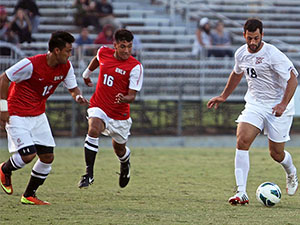 The CSUN men’s soccer team (15-7-1) concluded the 2013 season with a heartbreaking 1-0 loss to the Stanford Cardinal (10-6-4) in the second round of the NCAA Tournament Sunday night at Matador Soccer Field.

Despite the early exit, the Matadors managed to string together seven consecutive wins to start the season, tying the 1979 school record for the best start in program history.

CSUN started play this season hosting the Ryan Rossi Memorial Tournament, where they defeated Albany (0-1) 3-0 and Memphis (1-1) 4-1, en route to the tournament title.

Next, the Matadors hosted the University of San Diego (0-2), the team that knocked them out of the NCAA Tournament last year.

Northridge was able to exact revenge thanks to two first half goals, handing the Toreros their second straight loss of the season behind a 2-1 victory.

Following a narrow 2-1 win over Saint Mary’s (2-1-0), the Matadors made Division I history with four consecutive wins to start the season. Senior forward Brian Behrad had both goals for CSUN, including the game winner with six seconds left in overtime.

In the opening match of the 2013 TLC Plumbing, Heating & Cooling Lobo Invitational in Albuquerque the next weekend, the Matadors routed Central Arkansas (3-2-0) 4-1. Lev-Ari led the way with two goals.

After winning six straight, the Matadors garnered national recognition and were ranked third in the nation by the National Soccer Coaches Association of America (NSCAA).

Northridge followed that up with a 2-1 home win over UNLV (2-4-0) before losing for the first time this season to the No. 11 UCLA Bruins (4-2-1), 4-2. Sophomore goalkeeper Adam Hobbs had four saves in the match.

CSUN blanked Sacramento State (2-4-3) 3-0 on the road to begin Big West play, recording its sixth straight win in Big West Conference openers. Seven different Matadors had at least one point in the match.

The following week, conference foe UCSB (8-4-0) handed the Matadors their second loss of the season, converting on a controversial penalty kick with eight seconds remaining in overtime. Hobbs had a season-high six saves.

The Matadors would bounce back two days later, routing Cal Poly (8-6-0) 3-1 behind two goals from Lev-Ari and two assists from sophomore midfielder David Turcios. For his efforts, Lev-Ari picked up his second Big West Player of the Week Award.

Head coach Terry Davila earned his 150th win in the opening match of the Big West Conference Tournament, as CSUN crushed Cal Poly (10-9-2) 4-1 at Matador Soccer Field. Seven different Matadors contributed with at least one point in the match.

As astounding as Lev-Ari was throughout the season, his most impressive game came on the road in the Big West Conference Semifinals against No. 10 UCSB (12-5-3).

The junior striker registered a hat trick, including the game winning goal in the 82nd minute, giving Northridge a 3-2 victory and a shot to repeat as Big West Conference Champions.

Two days later those aspirations were cut short by the No. 18 UC Irvine Anteaters (14-4-3) who shutout the Matadors 1-0.

Despite failing to capture a second straight Big West Title, Northridge was awarded a bye in the first round of the NCAA Tournament before losing to Stanford in the second round.

Although the Matadors will be without the services of senior players Carlos Benavides, Chris Smith, Beto Velasquez and Behrad for the 2014 campaign, most of their squad will remain intact.

Next year CSUN will look to regain the elusive Big West Conference Title and make a deeper run into the NCAA Tournament.