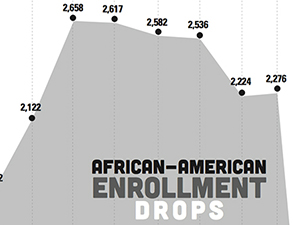 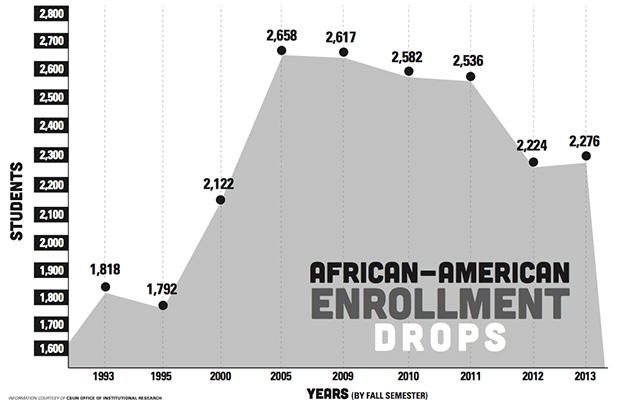 Dawaun Lucas, 21, an African-American senior majoring in marketing and finance, and also a member of the Black Student Union (BSU) and Alpha Phi Alpha Fraternity, Inc., has noticed the low numbers of African-Americans at CSUN.

“It’s evident,” Lucas said. “Coming in as a freshman until now, I’ve seen a diminishing population (of) African-Americans, especially in the incoming freshman, in particular with African-American males.”

In spite of the Fall 2013 semester having the largest freshman class as reported earlier by the Daily Sundial, overall African-American enrollment at CSUN has declined, according to reports by the Office of Institutional Research.

This is the lowest percentage of African-American enrollment since the Office of Institutional Research began recording figures in 1993.

Dr. Anthony Ratcliff, associate professor in the Pan-African studies department, sees this as an alarming trend and attributes it to lack of concentrated recruitment done by CSUN.

“I think a lot of it has to do with the way the university recruits students,” Ratcliff said. “I know in the 90s, they would go out through all of Los Angeles and do a really good job of going to Dorsey High and Crenshaw, (places) that had larger numbers of African-American students where a lot of (recruiting) programs have been stopped.”

Because the CSU anticipates more students than they can enroll, freshman impaction takes place and priority is given to freshman from designated local areas.

Freshmen who reside in CSUN’s Local Guaranteed Admission Area (LGAA) have a lower eligibility index score than freshman outside of the area.

The LGAA is quite large, including 30 districts in both Los Angeles and Ventura counties. Private high schools are also included with the districts.

Ratcliff said that enrollment impaction may have negatively affected CSUN.

“There are places like EOP and a few other organizations on campus that will still go into those communities,” he said. “But by and large, really it’s this thing called impaction where they only really focus on the surrounding community, and so since the surrounding community doesn’t have as many African-Americans, then you have few African-Americans coming to this school.”

As a member of Alpha Phi Alpha, Lucas works with their national program Go-to-High School, Go-to-College where members go to schools in ethnic communities to teach students the benefits of going to college as opposed to the military.

Seeing the importance of continuing this legacy of helping communities of color get into college, Lucas sees a deficit in the African-American student population.

Of the 23 CSU campuses, California State University, Dominguez Hills, has the highest enrollment of African-American students at 2,481, according to a 2012 CSU Enrollment by Ethnic Group report. That same year CSUN followed closely behind with 2,224 of African-American enrollment but the group currently only comprises 4.8 percent of the student population.

According to UCLA’s Undergraduate Admissions, African-American enrollment this fall quarter is at 3.8 percent which prompted students to create the Nov. 4 viral  video “The Black Bruins”  to raise awareness about the issue and urging people to sign a petition to create help the problem.

UCLA Vice Chancellor for Student Affairs Janina Montero released a statement responding to the video saying that, while they are concerned with the low number of African-American students, enrollment is at its highest this fall quarter since 1995.

The statement goes on to say that due to race not being part of the admissions process, it is difficult to change low enrollment for African-American and other underrepresented students and calls for a return to affirmative action.

“That is why all 10 UC chancellors and the UC system’s president have submitted friend-of-the-court briefs in support of affirmative action in two recent cases taken up by the U.S. Supreme Court,” Montero said in the statement.

California used race, sex or ethnicity as a factor in admission into state government institutions, including colleges and universities, up until 1996 when Proposition 209 effectively banned this practice.

After 1996, enrollment for African-American and Latinos specifically at UCLA quickly dropped, according to an article published by NPR. The U.S. Supreme Court recently debated whether or not affirmative action is constitutional, citing two states where it was banned: Michigan and California. Although arguments have been heard, there has been no final ruling released by the Supreme Court.

Since 1993, the two biggest ethnic/racial groups enrolled at CSUN are white and Latina/o, with Latinas/os surpassing white student enrollment this year at 14,553 – an all-time high in Latina/o enrollment, with white students at 10,432, according to the Office of Institutional Research.

Thomas Kollie, 21, junior art major, is an African-American at CSUN that works in the EOP department as an office assistant/mentor. He was a high school student at Dorsey High School.

“I don’t know the exact reason (for the drop in African-American enrollment) but I would relate it back to the San Fernando Valley State issues when we had to fight just to get here,” he said, referring to the founding of ethnic studies courses and departments such as Chicana/o studies and Pan-African studies.

He, like many students and faculty, have noticed the low African-American presence on campus. But a good way to fix this, Kollie said, is to continue to build the mentor-mentee relationship that encourages college enrollment and attainment. Additionally, he advocates for more ethnic solidarity and unity for this issue, among others.

Black colleges and a disconnection with culture

EOP at CSUN has been actively focusing on students that meet the criteria of being in financial need, that are part of historically underrepresented communities, that meet family income guidelines and students that are first-generation at college.

“Because the populations in California have grown so much over the last decade, we are also now looking for first generation-type students,” said José Luis Vargas, director of EOP. “It’s not the official criteria, but that’s another element that we look at. That’s fairly recent. For about the last five, seven years. The program has been around for 43 years.”

In addition to actively going out to search for qualifying students, EOP also integrates students into transitional programs, typically for six weeks, to prepare new students for the college experience.

In spite of higher education budget cuts, funding for CSUN’s EOP grants have remained steady at $1,706,698 per year for the last nine years, according to Sharon Eichten, associate vice president of Budget Planning and Management.

Ratcliff suggests that there also might be a lack of connection between incoming students and overall college curriculum. If more classes were to focus on African-American issues, and focused on cultural connections, there might be an improvement in enrollment and retention.

“I ask my students when they get here, how many have taken a class where you learn about African-Americans and most of them have never taken one,” Ratcliff said.  “They are very disconnected from their own culture and own identity… I would think it would be a good thing about teaching them about themselves, just to love themselves. It’s kind of corny but it’s an important thing that young people don’t really get when they come here.”