Will Derrick Rose wilt away? 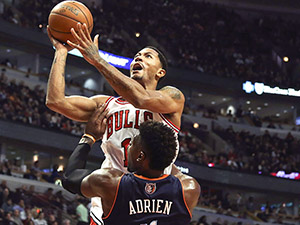 The 25-year-old Chicago native, 2010-11 NBA MVP, and No. 1 overall pick in the 2008 NBA Draft has been viewed as the star to lead the Bulls to their seventh NBA Championship, and the only non-Jordan banner. However, Rose suffered yet another set back to his young career by sustaining a tear in his right medial meniscus.

Rose made the smart decision opting to have the cartilage repaired and reattached because he is young enough in his career where he can recover and return to all-star status.

Another reason he chose to have it repaired instead of removed were the opinions of players who chose to have the cartilage removed like Miami Heat’s star Dwyane Wade, or former Portland Trailblazers player Brandon Roy, who have said it will cause more problems later in the young point guards career.

This injury is a frustrating blow for Rose because he is one of the most exciting players in the NBA. Rose relies heavily on the ability to stop on a dime, change directions laterally and explode out of those cuts and be aggressively attacking the basket, and all of that agility relies on strong, sturdy knees. This new injury could make the difference between Derrick Rose the superstar/game changer, and Derrick Rose the above average point guard.

Regardless of how well Rose recovers from this injury, he will still be better than most of the point guards in the league, but as of now, he becomes a liability as a franchise player until he can prove to the Chicago Bulls organization he can make a full recovery and sustain the abuse of playing a full NBA season.

He is now viewed as a player with two bad knees, a surgically repaired left ACL suffered in the 2012 playoffs, and now a torn medial meniscus in his right knee. With the type of player Rose is, he deserves the chance to prove he can still play at an all-star level because he attracts fans and publicity. Rose sells out games, whether it’s a home game in Chicago, or on the road for fans to see him once or twice a year. He also is the reason why the Bulls are featured on nationally televised games. Outside of his production on the court, he is a seat-filler, ticket-seller and money-maker for the Bulls organization.

Still, Rose is young enough to come back from this unlucky stretch of injuries. Sports has seen it before, most notably with NFL superstar Adrian Peterson, the running back of the Minnesota Vikings,  who came back from an ACL tear and posted a 2,000 yard season . It is all about staying strong mentally and rehabbing patiently and properly.

A part of staying strong mentally involves playing with a free mind. Rose has to play without having the injury constantly in the back of his mind.  If he continues to think about it, to the point where every move he makes he is aware of the injury, it will hold him back. Rose is at his best when he is unleashed, using his creativity to weave through defenders. If he can’t get back to that mentality, he might fall into the Brandon Roy/Greg Oden pile of players who were ascending to superstardom, but fell short due to injury.

If the Chicago Bulls franchise player is as strong mentally as he will be physically after rehab, he will return to full force for years to come.