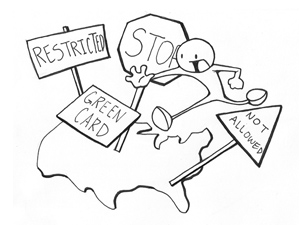 “Lucky,” I answered. “I’m stuck in school doing my midterms and you’re going off to party. Good life.”

Matt (an alias used for this story) is an undocumented immigrant who lived in the U.S. for about 20 years. His California driver’s license expired a long time ago and due to the issue with his status, he could not get a license in the state anymore. Now, his Arizona license expired and his next state was Nevada.

“I thought California passed a law or action or something that gives immigrants licenses,” I said.

“That begins next year. I can’t just drive without a license for one whole year,” Matt answered.

Matt is a sushi chef in the Northridge area. He has been a chef for more than 10 years. With a great sense of humor and sushi skills, he does not only serve the best food but entertains his customers.

However, he needs to find a restaurant that is willing to hire him illegally and pay with cash, since he is not permitted to work with his current status. Even if the employer treated him wrongfully and fired him without a notice, Matt would have no right to complain. He even married his friend who is a citizen to get a green card, but “something messed up,” so he still remains as an undocumented immigrant.

I have several other friends who are like Matt. Most of them moved to the states with student visas and applied for green cards. But there is no guarantee of when the green card will be issued. Until that day comes, they keep extending the student visas. Sometimes it works, sometimes it does not.

Often the visa application is denied, too. Then they become undocumented immigrants, or they leave. My ex-boyfriend from three years ago broke up with me when he could not extend his visa and left the U.S.

Most are not knowledgeable of the complicated immigration laws and are forced to spend hundreds and thousands of dollars on lawyers. And nothing is promised.

I had helped one of my friends with his paperwork because he did not have $1,000 to spend on a lawyer. His student visa was about to expire. (That application got through, thankfully.)

While waiting to get a proper status to stay in the U.S., there are not many things they can do. They cannot work unless they are hired illegally and because they cannot work at a decent position to make enough money, they cannot afford the expensive non-resident college tuition.

Tammy (an alias used for this story) lived in the U.S. for 10 years with a student visa but was never recognized as a resident. She was admitted to UC Berkeley and went to the school as an international student. However, she eventually dropped out because she simply could not afford the international student tuition.

The recent film “Captain Phillips” depicted America’s struggle to rescue an American captain who was taken hostage by Somalian pirates. Even though the nation put all of its effort and power to save the captain, they killed the pirates without a trial and lied to the pirate captain to lure him out.

If I was in that situation as Captain Phillips, America will do the same for me. But not for Matt or Tammy because they are not citizens. They are viewed as expendable, like the Somali pirates in the movie.

After talking to Matt I compared myself with him and Tammy.

Tammy did better at school and got admitted to UC Berkeley, which I did not even bother to apply to. As a church bible study leader, she embraces and comforts others who go through the similar situations as her.

Although I was born in the U.S. and they were not, it seemed like they were making more positive influences in society than me.

I cannot help but ask, why should we isolate these people and blindfold ourselves from what they are going through when they are clearly part of us, our nation?

To these immigrants, America is not a dream but the subject of fear. Although they settled perfectly in America, the nation rejects them from being an equal part.