Stopout, a growing and concerning trend among college students 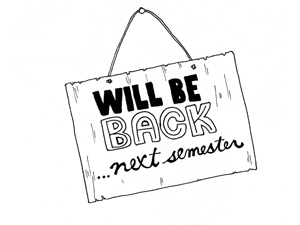 The term college dropout describes a student who decides college isn’t working out the way they thought it would so they leave and never look back.

However, a new report shows that a college “stopout” is becoming even more common amongst college students.

The term “stopout” is used when a student decides college isn’t working out for them at a certain period of time in their life. Their solution to that is to discontinue their education for a semester or two only to return when it is more convenient.

Toby Park, who conducted the survey in the USA Today report, studied 38,000 community college students who had enrolled in the year 2000, in the state of Texas. The study shows that 94 percent of college students stop out in the course of earning their degree.

“Students who return after stop out are more likely to persist toward a bachelor’s degree,” said Park.

While stopping out may not be as detrimental as dropping out, it is still an issue that leaves the government with billions of dollars spent on financial aid and loans for students who may not even return to receive their degree.

According to a report done by USA Today, $9 billion was spent on students from four-year colleges who decided to stop out before reaching their sophomore year from 2003 to 2008.

For CSUN English major, Ashley Delgado, 22, stopping out is a waste of time and money.

“I get loans to be able to afford college but once I graduate I’m responsible for paying off those loans plus the interest, so for me it would just be such a waste, ” said Delgado.

Students who stop out of college also affect their road to graduation according to Park.

“Stopping out certainly increases time to a degree and can come at a great cost to both the student as well as the university–particularly if the student is stopped out for a longer period of time and needs to retake any courses before moving forward,” said Park.

The study also shows that some students stopped out because they got a new job and needed the money, so decided to put off college for a little while.

For some students who are on leave, like Diana Hovsepian, 21, kinesiology major, leaving college was more of a change in mindset.

“I just always thought college was what I was supposed to do after high school was over, but after a while my priorities changed,” said Hovsepian.

Hovsepian is still on her break from CSUN and is still not sure when or even if she’ll go back. For her it’s a matter of getting back into the mindset she had when she first started.

“I feel like I have to be completely ready and I don’t feel like I am yet, ” Hovsepian said.

Park feels that there are always factors in students’ lives that are the cause of them stopping out.

“The reality is that many students (and particularly community college students) face significant struggles preventing them from staying continuously enrolled in postsecondary education,” said Park.

Derrick White, 19, deaf studies major said he has seen many of his friends leave CSUN with the intent of either coming back or changing schools.

“Me and my friend both started together but this semester he told me he was going to take a break and come back in the spring, ” said White.

Recently, White overheard one of his classmates say that he felt like he was wasting his time when he could finish faster by going to a trade school.

“I think, even though college isn’t easy to get through, to finish and get your degree really says a lot about a person, but I don’t think it’s for everyone, ” said White.

There are some solutions to this problem that are being figured out according to Park.

“The state of Texas recently partnered with the gas and oil industry to offer stackable credentials towards associated degrees whereby students can gain credit in a number of ways in partnership with the oil and gas industry and then gain full-time  employment within the industry after completing the credential,” Park said.

Park believes that there is always a solution and a way to better the issue of students not making it to graduation/receiving their degree.

“Our economy is one that demands highly skilled workers with degrees and certificate credentials. Any steps the community college sector and independent industry can take to work together are an excellent vehicle for degree completion and economic well being, ” said Park.