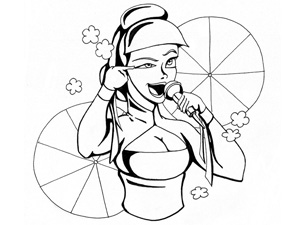 It was just a regular Sunday night after a busy shift, one hour before closing. My co-worker decided to change the TV channel to view the American Music Awards (AMA). Some odd twist of fate led me to witness the beginning of Katy Perry’s performance and that sense of dread creeped on me and I couldn’t help but facepalm myself.

In a move that is all too common throughout American media, Perry was opening with her song “Unconditionally” dressed as a geisha. Ms. Perry, you really fucked that performance up.

Perry’s costume was a full-blast cultural appropriation of Japanese culture. Perry wore a kimono, had geisha make-up on, a hairdo complete with an Asian-inspired backdrop, back-up dancers dressed up as geishas who wielded fans, cherry blossoms, floating lanterns and the Great Wave of Kanagawa.

The customers who remained in the restaurant saw this and asked if we liked what Perry was doing. To my disgust, my co-workers (who are all either Thai or Japanese) said yes. But I said no, much to everyone’s discomfort.

But why so angry? Because Perry’s performance is an assault to Asian-Americans. Let me break it down. One, Perry is perpetuating the stereotype that all Asians are foreigners and are exotic beings with exotic cultures. Two, Perry’s costumes and stage set-up was completely ignorant of her intention to copy the Japanese culture. Three, Perry’s song “Unconditionally” and her costume unfortunately tie in with the lotus blossom stereotype and the idea that Asian women are submissive and exotic.

Perpetuating the Stereotype of Asian foreigners

Why, Katy Perry? Why did you have to dress up in an Asian-inspired theme for your performance? In what way does your song have anything to do with any Asian culture at all? You just ruined the image of Asian-Americans because you decided to dress up in an Asian inspired outfit. According to the Centers for Disease Control and Prevention (CDC), America has an Asian population of 18 million people. Amongst the 18 million, we are a diverse group of people who are not to be broken down into fans and kimonos.

Instead of just being yourself, you decided that you needed to appropriate a whole race of people. Let me be clear: no, not all Asians know how to do a fan dance and no we do not all own a kimono or some sort of authentic Asian garments. We are Americans just like everyone else in America, shaped by our surroundings.

But Perry’s performance just reinforced the idea that to many people, I am still not an American and someone that looks like me is not visible in American society and media because this kind of racism can still happen without major backlashes on a heavily televised event.

Perry’s performance was meant to be a tribute to Japanese culture. But the entire performance was like seeing those Asian fast food restaurants at the mall: a mash of Asian cultures as if it was a pan-Asian buffet, also known as cultural appropriation.

First, her costume is not a traditional kimono. A kimono does not show cleavage. However, Perry’s costume showed off her bust in an exotic costume. Second, a traditional kimono does not have slits down the sides of the dress. Perry’s costume had those slits to show off her legs. The slits on the side of the dress is more linked to the Chinese dress, cheongsam. In the sake for a cool costume, Perry disrespectfully melded two traditional dresses together and tried to pass it off as Japanese. Her costume was just as confusing as her performance. Is it a kimono or a cheongsam? But to Perry, both dresses were probably the same in her eyes. Because, obviously, all Asians are the same.

Because for Ms. Perry, after her performance, she can take off that yellow skin she was wearing. She can remove that costume, take down the props, and take off the make-up and go back to being “normal.” But what is offensive is that Perry took advantage of that privilege to appropriate Asian culture. We cannot take off our yellow skin. We cannot perform one song in some get-up and the next moment take it off and never have to deal with the burden that comes with wearing that skin. But for Perry, because of her privilege, she can wear our skin but never truly understand or even appreciate what it means to be an Asian-American. Her white privilege allows her to choose to use our people and our culture as a prop. At the same time, her performance only keeps Asian-Americans from being visible to the American public. That is white privilege and cultural appropriation.

It wasn’t only horrifying to see Perry dressed up as a “geisha,” but to also hear Perry belt out her song, “Unconditionally” while in an appropriated female Asian costume. Let’s start by examining “Unconditionally” lyrics:

I will love you unconditionally

There is no fear now

Let go and just be free

I will love you unconditionally

So come just as you are to me

The cross references between the lyrics and Perry’s costume as Cio-Cio San from the opera “Madame Butterfly” is hard to not notice.

Cio-Cio San tells the story of a Japanese woman who takes a Western lover and is left behind by him. She kills herself after finding out about his betrayal because she could not live without her Western lover.

Quite unfortunate, really. But with Perry dressed in yellowface and the lyrics of the song, the image of a servile Asian woman who would weather anything in order to make her lover happy is blatant. And while Perry can wash off that performance, the icon of that show, an exotified Asian woman submitting to her lover, cannot as easily be erased from the minds of the public. It only does harm to the thousands of strong Asian American women in America who are fighting for their rights everyday.

But really what irks me is my co-worker’s reaction to Katy Perry’s performance. They called it artistic and that it wasn’t offensive to them in anyway. Even my ethnically Japanese coworkers were OK with the performance.

And although Twitter and Tumblr blew up with sides either defending or attacking Perry, the fact that cultural appropriation and yellowface is still OK to do in the American public is a gigantic problem. I simply ask that we take a stand and start deconstructing this racist system instead of submitting to it. We, as people of color, must step up and rise against a society that has kept us under their thumb for too long.