Warm up this season with these holiday ales 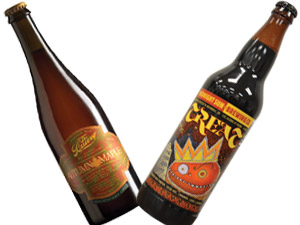 Tis the season, yet again. While some of us are counting down the days until our last final, and others are desperately clinging on to multiple-term-paper sanity, there is one thing that is certain to bring Christmas cheer into even the blackest of coal shaped hearts: Beer.

That’s right. Nothing says “Happy Holidays” quite like a big, old gust of beer breath. So whether you’re heading back home to see the folks, or spending this winter in a post-semester hibernation, these brews are sure to satiate your palate and prepare you for the awkward conversation with your weird cousin or uncle on Christmas day. Cheers!

Description: The Bruery, located in Placentia CA, has been around for a few years and knows a thing or two about brewing heavy-bodied beers with unique twists. Autumn Maple is just one of their many fine brews and would pair perfectly with a brisk winter evening. The reddish color and light head mixed with a sweet aroma make the presentation almost as impressive as the first sip. The taste is something along the lines of a strong Belgian mixed with maple syrup, vanilla spice and a humbly sweet finish. To put it simply, this is the kind of elixir the season calls for. This beer is best enjoyed slightly chilled, with that extra special someone…because 10% goes a long way, and you may need a ride home.

Food pairing: It’s a classic Thanksgiving beer. For a sure bet go turkey and mashed potatoes. If you’re feeling extra saucy, and it’s closer to Christmas, throw some prime rib in the mix. Settle down with a slice of pumpkin or pecan pie for the nightcap.

Description: AleSmith is a San Diego staple for fellow beer snobs. It is rare to find a beer from this brewery that isn’t as good as the last, and when the time comes to unleash their winter selections there are no exceptions. But how can a brewery located in the weather haven of San Diego make a brilliant holiday ale you ask? Crafting a fine winter ale is more about technique than it is location, and AleSmith is more than up to the task. The YuleSmith Holiday Ale is brewed seasonally, as most winter beers are. The brew is in keeping with AleSmith’s signature hoppy and strong beers, but has a delicately nice malt that accompanies the piney bitterness. The beer pours an amber color and gives off a caramel like aroma that hits your nostrils almost immediately. The taste is bold, with just enough hops to knock you flat, and a toasty aftertaste to warm you up after the dust has settled. Who knew beer could be so dramatic?

Food pairing: The hoppy and malty blend calls for something lean. A good salmon or sea bass dish would pair beautifully. Mix that in with some roasted asparagus and you’ve got yourself a satisfied stomach. For dessert, go apple pie. Enough said.

Description: There was a dark, tumultuous time when one couldn’t really find anything from the Alaskan-based brewery, Midnight Sun, in California. It wasn’t until recently that the beer gods smiled upon us, and made the availability of this brewery’s beer now slightly above “extremely scarce.” Not to worry though, because when you taste T.R.E.A.T (The Royal Eccentric Ale Treatment) you’ll understand that beer like this should not be over-indulged. It should be enjoyed during certain times of the year. Specifically when the weather gets chilly, the scent of pine starts to fill the house and wearing shorts when it’s 60 degrees outside is only slightly acceptable. This porter packs a wallop, but goes down ultra smooth. The velvety finish of the cocoa, spice and pumpkin not only tastes like no other beer around, it satisfies your dessert craving while guaranteeing that you’ll come back for seconds.

Food pairing: Since the sweet is already covered in this brew, savory is the ticket. Roasted chicken and yams, hearty beef stew or a good old-fashioned chicken pot pie would do just fine.

Description: Don’t be dissuaded by the unassuming, redneck-esque aluminum can– Oskar Blues’ ‘Yella Pils’ will surely put a big grin on your face this holiday season. Crisper than the Autumn dew, this Czech-style pilsner comes heavily fortified with ‘100% pale malt,’ lending itself to uncompromising flavor and taste. Oskar Blues Brewery specializes in small-batch beers, including seasonal IPAs, Belgian-style ales, and even a non-alcoholic root beer.

Food Pairing: Although this beer does just fine by itself, its subtle hoppiness and smooth flavor works well with shellfish and roasted chicken. Use it as a braising liquid, accompanied with some fresh aromatic herbs— like rosemary and thyme— for an out-of-this-world bowl of steamed mussels.