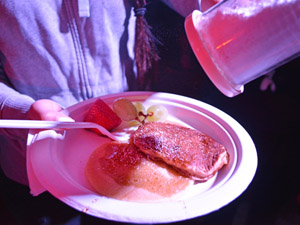 Hundreds of students gathered around the Oviatt Library patio with pancakes, coffee and juice in hand.

The annual “Final Flip” took place Wednesday night to rejuvenate students as they prepared for their final exams. The event was themed after the Tim Burton film “The Nightmare Before Christmas.” Two large tents were set up on the Oviatt Library lawn and students lamps were posted throughout the area.

“It’s cool because we’re trying to study and work on projects (in the library) late at night and the school is taking care of us,” said Kris Robison, senior kinesiology major. “The school is always having something going on and it’s cool.”

Members of Associated Students (A.S.) stood in one of the tents behind tables covered with platters of pancakes and served students two pancakes at a time. Spread across another table was syrup and other condiments for the pancakes. Students moved in an assembly line fashion to receive their pancakes.

Students participating in the silent disco occupied the second large tent. As reported by the Daily Sundial, A.S. ordered 80 headphones from a company named Silent Storm in San Francisco. Each headphone was equipped with a USB drive that connected to the DJ’s audio system and was transmitted to the headphones.

Students inside the tent and around the DJ’s table, bobbing their heads to the disco music that coursed through the headphones decorating their heads. A.S. Productions member Fabian Mendoza deejayed the event.

“I definitely think it will bring out a crowd,” said the senior communication studies major. “It’s different so it will be attractive.”

The silent disco allowed students to listen to live music without disturbing surrounding classes or students studying in the Oviatt Library.

The Final Flip came to an end around 10 p.m.