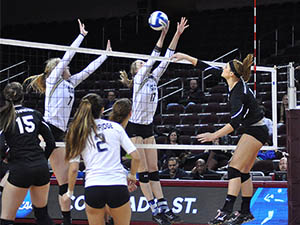 Up four in the fifth set and one kill away from their first victory in this year’s NCAA tournament, CSUN gave up two straight points to Colorado State, forcing them to take a timeout.

With the two teams back on the court, freshman outside hitter Michelle Lawrence got a set and spiked the ball right out of bounds, and the Matadors began to celebrate.

Colorado State’s sophomore outside hitter/setter Adrianna Culbert led the Rams with 17 kills of her own.

The Matadors got behind early in the final set, giving up the first two points to the Rams. Sophomore middle blocker Cieana Stinson tied the game at four with a kill aimed toward the left side of the court.

Colorado State then put together a string of three straight points and led 7-4, but CSUN tied the game again with some strong defense, digging all the attacks thrown their way by the Rams and scoring as a result.

Head coach Jeff Stork was proud his team came away with a hard-fought win.

“This is still a culmination, this is the the icing on the cake of a historical season,” head coach Jeff Stork told gomatadors.com. “This is the first time we’ve done this. The girls bought into our systems and they bought into each other.”

Northridge looked strong to start the match, taking a 5-2 lead in the first set, but the Rams fought back and tied the game at five apiece. From there, the set would be contentious with the score being knotted seven times, but CSUN put together a 9-0 run and took the first set, 25-15.

The second set also saw a lot of back and forth between the two teams, but Northridge was able to shoot off a 7-1 run with the game knotted at 14 to take a 21-15 lead. The Rams knocked on CSUN’s door and closed the gap to three, but Hinger’s kill put Colorado State away, 25-21.

But after halftime, Colorado State roared back with the best hitting percentage of the match in the third set at 72.7 and won easily, 25-13. The fourth set was more tightly contested, but several of CSUN’s attacks were being hit out of bounds, granting the Rams easy points. The Matadors also couldn’t handle the improved defense by Colorado state and lost, 25-18.

“I think they definitely picked it up a bit after that second set,” Hinger said. “We let them in a little but we decided we are here for a reason. We’re not going to let an almost undefeated team think they can skate by us and we brought it to them.”

Stork felt Northridge going the distance and winning says a lot about the team’s resolve.

“It wasn’t the prettiest win in terms of losing the third and fourth the way that we did but volleyball is winning three out of five which we’ve done several times this year,” Stork said. “This was a huge character win.”

The Matadors will play the USC Trojans in the second round of the tournament Friday at 7 p.m. in the Galen Center.