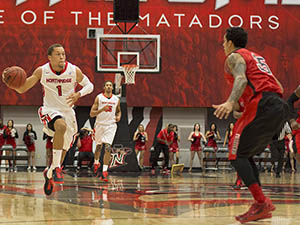 After cruising to easy wins against La Sierra and Southern Utah, the Matadors (5-5) dropped their final home game before the break to the Seattle Redhawks (5-3) 58-53 Thursday evening at the Matadome.

A hot start by sophomore forward Tre Hale-Edmerson would be spoiled by costly turnovers and a poor shooting night from the charity stripe, as the Big West leaders in free throw shooting only hit 6 of 13 attempts. The Matadors allowed the Redhawks to grab 12 offensive boards, the reason coach Reggie Theus believes his team lost the game.

“For 35 minutes we played very well. It was the last five minutes of the game, they got five second-chances at the rim. We didn’t offensive rebound, we didn’t come up with the 50/50 ball. That really is the difference,” coach Theus said.

Hale-Edmerson led the charge for the Matadors early as he drained his first career three pointer, blocked a shot and played with high energy on both ends of the court as CSUN held a 13-12 lead with 15:07 to go in the first half. Seattle would match the Matadors point-for-point as they trailed or led by a slim margin in a half that saw eight lead changes.

Neither team could break away in the second half, as Seattle responded to an early Hale-Edmerson jumper with a three pointer of their own to take a 32-31 lead. The momentum finally appeared to shift when senior guard Josh Greene hit a three pointer to give the Matadors a 40-35 lead, bringing the Matadome crowd to their feet and forcing Seattle to call a timeout with 12 minutes left.

A pair of free throws by sophomore forward Trevone Williams would give CSUN their last lead of the night, 48-43 with 6:26 remaining. Seattle would slowly rally by playing solid defense, only allowing two Matador buckets in the last 4:56 of the game while grabbing offensive rebounds leading to easy scoring opportunities.

With a 51-50 lead in the final minutes of the game, the Redhawks snatched three offensive rebounds in a single possession despite being blocked twice and junior guard Isiah Umipig hit a dagger three pointer with 1:29 left, pushing Seattle ahead 54-50.

A costly turnover by Greene would lead to a Seattle possession and eventual free throws for a 56-50 lead with 50 seconds remaining.

Sophomore guard Landon Drew would hit a desperation three pointer with 40 seconds left, but Seattle would milk the clock and sink two free throws as the Matadors were forced to foul with time winding down, bringing the lead to an insurmountable 58-53 lead with eight seconds left. Greene would miss a three pointer before the final buzzer.

Coach Theus noted how Hale-Edmerson’s performance was hindered by his foul trouble, as he got off to a great start but played more conservative when he was in danger of fouling out in the second half with four fouls.

“Tre was having his best game of the year. Basically he controlled the middle of the floor tonight, around the basket, and it hurts,” Theus said.

Hale-Edmerson played with “extra incentive” during the game, as he said he considered playing at Seattle before committing to CSUN.

“I think now that coach has seen that I can do some of that, he’s gonna be on me a little more. I know what I can do, I can feel a little more confident so it will carry over to the next game and practices,” said Hale-Edmerson.

Junior guard Stephan Hicks, who only scored 13 after scoring five straight 20-point games, noted that his relatively quiet scoring night was not necessarily a contributing factor in the loss.

The Matadors will take a two week break for the end of the academic semester, before heading to Texas to play at Texas A&M – Corpus Christi. They will return home Dec. 22 to host Idaho.