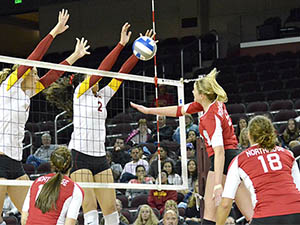 The Matadors, a top-20 team in the nation in hitting percentage, struggled as they only hit an uncharacteristic .144 for the match while USC only recorded six errors on a .340 hitting clip in three sets.

“We stayed with them offensively with kills and kills per set but unfortunately a few too many errors on our side,” said coach Jeff Stork.

The Trojans’ error-free first set would establish their dominance early as they held a steady five-point lead throughout the set. The Matadors appeared to be settled in as they scored the match’s first two points and took an early 6-4 lead. However, they would not grab another lead for the remainder of the match as they gave up four straight points to trail 8-6.

Junior middle blocker Casey Hinger and senior setter Sydney Gedryn would string together a few late kills at set point to bring the deficit to five at 19-24, but CSUN would give up the first set on a ball handling error.

USC would open much stronger in the second set, jumping out to a quick 9-5 lead. The Matadors responded to rally within a point at 10-9 behind a Gedryn tip and kills by Hinger and senior outside hitter Mahina Haina. CSUN would fail to tie the score or get much closer, as just a few points later the Trojans went on a seven-point run, bringing the score to 20-12.

Trojan sophomore outside hitter and the NCAA leader in service aces Samantha Bricio hit her fourth service error of the match to stop the streak at 20-13, giving the Matadors an opportunity to rally. Junior opposite hitter Natalie Allen smashed a kill to end a long rally and CSUN won an appeal to the referees to come within five points of the Trojans at 21-16. The rally would be short-lived as CSUN saw scattered kills from Allen and Haina in the end of the set as the Trojans cruised to a 25-18 victory.

The third set played out much like the first two, as the Trojans hit .367 while CSUN only hit .071, falling behind quickly in the set.  Following a Bricio kill, the Matadors rallied for five of the next seven points, coming within two trailing 15-13. A Trojan kill and errors by Allen and Hinger would give USC a five-point lead that they built on en route to the final point of the set.  CSUN would not give up easily, as they made USC work hard for the last point, prolonging a rally that would end with a Bricio kill that clinched the match.

Despite dissatisfaction with the result, Stork and players were content following the match, reflecting on their performance to reach the second-round match.

“I think we did well in both matches,” said Haina, referring to Thursday night’s five set victory over no. 12 Colorado State in the first round of the NCAA Tournament. “We could have minimized our errors here and there tonight but I think overall we did pretty good as a team and we went pretty far, so I’m not mad about anything.”

Gedryn, who finished with 31 assists and four kills in her final match as a Matador, was proud of her teammates’ effort.

“It’s been such an honor, so much fun to get to play with all the girls, and for our senior year to go this well and make the second round of the playoffs is a dream come true,” Gedryn said.

Both Gedryn and Haina, along with senior outside hitter Britney Graff finish their Matador careers among career leaders in school history in blocks, assists, and kills.

Despite the loss, the Matadors close out a historic season in which they captured a share of their first Big West title, recorded their best record in the Stork era, reached the top 25 and achieved their highest ranking in school history, defeated two top-25 teams (No. 11 Hawaii and No. 12 Colorado State) and won their first ever NCAA Tournament match.