All things Hendrix: Remembering the greats at Devonshire Downs 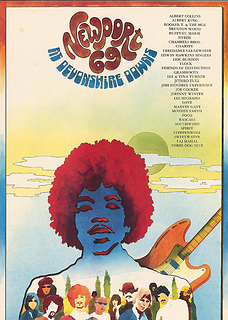 Whenever a documentary is released on the history of rock and roll showcasing countless festival performances, Woodstock is always a hot topic. But what about the Newport Pop Festival at Devonshire Downs in Northridge? For many, the thought of rock and roll royalty like Jimi Hendrix, Steppenwolf, Jethro Tull, The Byrds, Eric Burdon, Ike and Tina Turner among others playing in an area now known as the North Campus at California State University, Northridge. Medtronic, a medical technology company has an office location as part of the private industrial park occupying the land today.

The Daily Sundial reached out to artists on the bill including Michael Allsup of Three Dog Night and Michael Monarch, the original guitarist of Steppenwolf. The artists discussed their memories of the iconic event and the one thing they learned about Jimi Hendrix that they did not already know.

Daily Sundial: It’s been nearly 45 years since you played the Newport Pop Festival in June 1969. Nearly 200,000 people attended the event in Northridge, CA. The event made history books as one of the largest concerts of all time. When you think back on this event, what is the first memory that comes to mind?

Michael Monarch: Well, it was a long time ago but I still remember being on stage there. It was a pretty high stage as I remember it and very open with a sea of people.

Michael Allsup: Yes, I went to that gig and saw Hendrix with Mitch Mitchell and Jimi’s old military buddy (Billy Cox) on bass. Was Jimi playing the white stratocaster that he had used at Woodstock? Yes.

DS: Artists on the bill for the 3 day event included Ike and Tina Turner, Jimi Hendrix, Joe Cocker, Marvin Gaye, Creedence Clearwater Revival among others. Did you get the chance to see the other performers?

MM: Only a few bits and pieces.

DS: When playing a large festival like the Newport Pop Festival, what differences come to mind in terms of performance preparation than say a 1,700 seat concert hall or arena?

MM: Well I think sound is one difference. It can be hard to really fill a huge, open space with powerful sound. Plus, with so many acts sharing the same sound equipment it can be a challenge. The giant audience of a festival can actually seem intimate in a way because you don’t really see as many faces as in a smaller venue.

DS: There’s often an incredible energy that takes place when artists record in the studio. How do you take this energy and translate it out into live performances?

MM: I would say generally the excitement generated by a large, enthusiastic crowd gives the performers a boost and the energy can multiply. Steppenwolf recorded in a very small studio with just each other there and our engineers and producer. Pretty much the opposite of the festivals.

DS: Over the years you have had conversations with many individuals who worked close with Jimi Hendrix. What is the one thing you learned about Jimi that you did not already know?

MM: I was very lucky to meet Jimi early on. In ’67 or early ’68 we played in New York at a small club called The Scene. We did a couple sets there for a few nights in a row. In the audience were Jimi and many other rock superstars. Between sets the manager of the club told me someone wanted to meet me. I was 17 years old and was brought to a secluded spot in the club where I met Nico (Velvet Underground) and Jimi Hendrix who I considered the best and most influential guitarist of the day. Nico said ‘Jimi really likes your guitar playing.’ Jimi nodded and shook my hand and invited me to a private party afterward. One thing that struck me about Hendrix was how humble and gracious he was. The Scene was famous for after hour (2 a.m. to 5 a.m.) jam sessions and Jimi was there for that and asked to use my equipment. Of course it was my pleasure to let him!