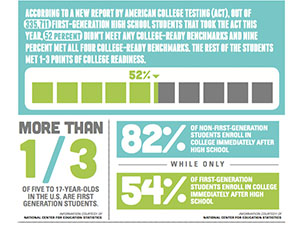 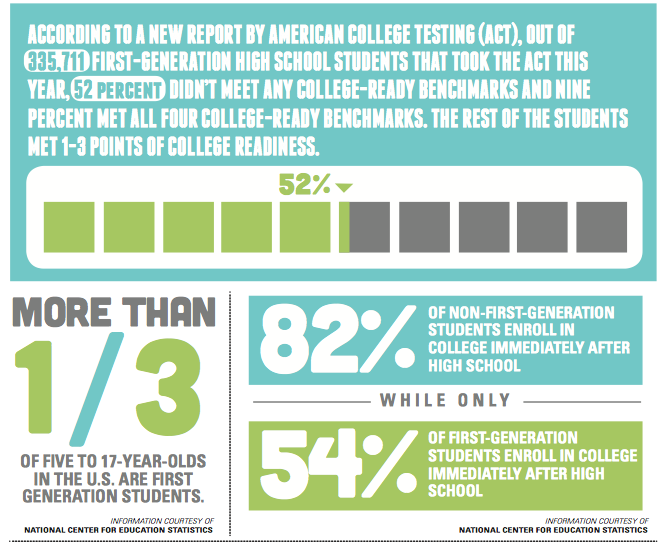 Denied from four different CSU schools including Northridge, a low-income and first-generation art student relied on his acceptance in the Educational Opportunity Program (EOP) to attend CSUN.

Each year EOP accepts special admits – students that are judged as unqualified by CSU admissions, but exhibit high academic potential. Thomas Kollie is one of the special admits accepted in 2010.

“(Being part of EOP is) probably the greatest experience of my life. The different areas I grew up in – there were people that wouldn’t tell me I could go to college or people who wouldn’t influence me to go to college,” Kollie said.

A part of EOP services creates intensive summer courses and workshops for incoming low- income and first-generation freshman designed to prepare them for college. The students who tested into courses below college level, like Math 92 or Writing 113A, receive an opportunity to complete some developmental courses through EOP transitional programs such as Bridge programs. Students who tested into college level courses attend the Fresh Start Program.

“The support services go all the way from mentoring programs to tutoring to advising. Everything that students need to make their way through college,” said Glenn Omatsu, coordinator for the EOP Faculty Mentor Program and Asian-American studies professor. “This is essential for first-generation students because somebody who comes to college who has (family members that are college graduates) already get informal advice.”

“If we take a group who doesn’t have parents that went to college, as a result how would they find out about college?” Omatsu said. “(On) this campus, as well as other campuses where EOP exists, the students have fought for the right to have special kinds of programs.” 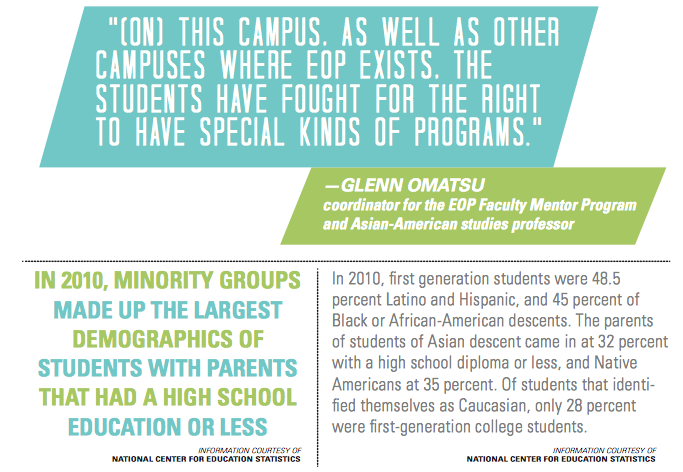 The TRIO programs housed in the Student Outreach and Recruitment Services office is a federally funded college opportunity program that focuses on first-generation students in middle schools and high schools in the San Fernando Valley. The programs were part of Lyndon B. Johnson’s war on poverty legislation.

Upward Bound TRIO provides instructions on various academic subjects after school, weekends and during the summer. They offer a six-week program where high school students take courses and remain in the dorms for three weeks. Talent Search helps sixth to 12th grade students in the San Fernando Valley get information about financial aid, scholarships, and college admissions to public, private, two-year and four-year postsecondary institutions.

“Since a lot of these families don’t know how to navigate the education system it may be totally different than their own countries. With these programs we are here to be that support system and guidance towards that information,” said Evelyn Torres-Garcia, director of TRIO programs.

From the students in two of the TRIO programs, Torres-Garcia notices a common self-doubt..

“Those self-doubts of whether you will be able to make it if you go to a four-year, that’s one of the things that we try to talk to them about as well. It’s that fear of ‘what if I don’t know anybody and what if I can’t do well,’” Torres-Garcia said.

“Academically, first-generation students often come into college feeling less confident and less prepared academically.  In particular, they may avoid certain majors, such as science and math and may have lower academic aspirations,” Sullivan said. “They may have received different messages growing up about the importance of college and of a degree.”

As a first-generation undergraduate who didn’t belong to EOP because it didn’t exist yet, Omatsu feels fortunate that he attended a community college.

“That probably saved me because if I had gone to a four-year institution I probably wouldn’t have made it because even though I had fairly good grades during high school I had no idea what college was about,” Omatsu said.

Although not all first-generation students are part of EOP or TRIO programs, courses—like University 100—focus on skills and resources needed to succeed in college and are available for any student.

Omatsu comes across students who don’t have money to purchase textbooks, food, or pay rent because they feel an obligation to share their financial aid with family member that are affected by the economic recession.

Programs for first-generation students aren’t distributed evenly throughout all universities. Although state legislature mandated CSUs and UCs to establish EOP, the program is non-existent or differs from campus to campus.

“Because of internal conflicts, differences in each college campus, and state politics—for example California had in 1996 the end of affirmative action. With the end of affirmative action some UCs used that to eliminate EOP programs on the grounds that EOP was seen as more of a race based program even though it isn’t,” Omatsu said. “They were able to use that to eliminate or reorganize EOP. In the CSUs, it has to do with the strength of the student movement on each campus. Also, how well EOP has been able to defend its mission.”

TRIO experienced a 5.23 percent budget cut for the fiscal year. Lack of funds resulted in the loss of two out of the six programs: McNair Scholars and Upward Bound Math and Science.

Omatsu sees problems with kindergarten to 12th grade education but he disagrees with those that don’t believe a four-year university should take the responsibility of dealing with that problem.