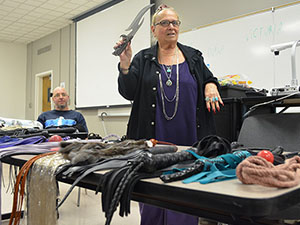 “One of the nice things about being a bitch is you have people doing things for you…I believe in hurting you not harming you, I’ve never sent anyone to the emergency room,” she said.

Dee added that she has no reservations when it comes to a sub’s (person that gives up control) sexual orientation, gender identity or background.

“Any warm bodies that want me to beat them are welcome,” Dee said.

“I think the sophistication and intelligence that each individual articulated and conveyed was extremely professional and beneficial for the entire presentation,” said Adam West, 25, a psychology major.

Panelist Count Boogie, a musical comedian and massage therapist, thought that the class was prepared and had a lot of great questions.

“They were ready so we could move past the trivial and get into the application and philosophy, and that’s always fun,” Boogie said, as he broke the sound barrier with his dragon tongue crack whip.

Raquel Cockrell, 26, a psychology major said, “I feel like I know a lot about the presentation but the question and answer (segment) is really driving it home. I think (this presentation) opens up (students’) minds and makes them more aware.”

“I like to think we’re sex enthusiasts,” said Matthew Lynch, panelist and presenter for the Center for Positive Sexuality.

“We encourage people who want to learn to get mentored. Be aware that everything has consequences. Do things safely and consensually,” Dee said.

After the panelists finished their presentation, Brogdon voiced how important she felt the presentation was for her students.

“I hope that students understand that these things that we consider outside the norm are not abnormal. I believe that awareness leads to acceptance and that’s in all parts of our life,” Brogdon said.