Finding themselves within their fursuits 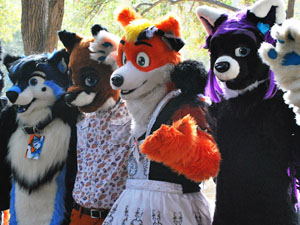 Subcultures, some with a rather odd nature, are emerging globally.Most can thank the Internet for their success; through forums and social sites, people with closet interests have been connecting in the public. One of the largest is the furry fandom.

Often called furries, this group grew out of a 1980s science fiction convention. Writer Steve Gallacci had a character drawing from his novel, which centered around anthropomorphic creatures. Anthropomorphic is defined as animals with human-like characteristics such as walking, talking, and intelligent thought. Throughout the decade the group gained more and more members until 1987 when the first convention was held and soon after the Internet became available to the public.

“I’m in the furry fandom because I can express myself, my love of cats, and my love of art and animation simultaneously,” said Mathew Netzley, a CSUN alumnus whose animal persona, or fursona, is an orange cat, even though he does not have a fur suit… yet. “I feel connected to the community, and have made many lasting friendships with wonderful people because of it. Especially now as an adult with an adult job and adult bills, it’s wonderful to have an escape and an excuse to get lost in the collective imagination where we can all become our talking animal fursonas. It’s fun, it’s silly, and you probably can’t call it normal, but that’s why I like it.”

Most furries have an emotional and/or spiritual connection with animals, and connect with their animal or animals through art or music. However, other furries may dress up in mascot-type outfits called fursuits. The fursuits are often an attention-grabbing aspect to the furry fandom.

“From a social psychological standpoint, people might seek out (the) furry fandom as a way to foster another social identity,” said Professor Debbie Ma, who teaches psychology at CSUN. “Humans possess a fundamental need to belong and this drives us to forge social relationships with others. We tend to prefer forming these connections with smaller sets of social groups.“

A member will spend anywhere between $500 and even more than $3,000 on a fursuit. Suits can be purchased online or at conventions, while some fursuits are handmade with assistance of online forums and advice.

“The furry fandom means many things to so many individuals,” said Desmond Rayford, a member of the furry fandom who wears a black and white cat with purple hair. “After stepping into and joining the fandom I would say that, to me, it means being around like-minded people who share your passion of seeing a smile on a stranger’s face.”

However, the suits are not the entire fandom. Most members discover their “true” selves by visiting online furry sites and participating in role-play games. The fandom has a following of art, animal, and music enthusiasts.