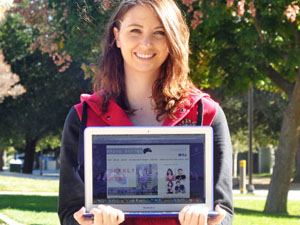 Emily Kelley, a self-proclaimed “seventh year senior,” is finishing up her college adventures here at CSUN, bringing with her several writing awards to the big finish line. Most recently she won a Geekie Award in August alongside her boyfriend for the blog they created together.

“The whole night we were just like geeking out!” Kelley said about the awards show, lively and full of contagious laughter.

Her passion for “geekiness” came pouring through the more she talked, and it instantly became clear how her blog began.

Kelley describes her work as “a geek culture and news blog.” Wrong Button Blog was started by her and her boyfriend, Peter Kunin, last November, and features entries such as “Ben Affleck announced as new Batman, nerd rage ensues.”

The award Kelly and Kunin won was for “Geekiest Website Content” and they were also nominated for “Best Retail Store/Website.”

The Geekie Awards ceremony, which began with a song performed by comic book legend Stan Lee, showcased a wide range of “geeky” stuff. Kelley and Kunin even got the chance to meet some of the crew who landed the Mars Rover.

Kelley clarified that “geekiness” has slightly different definitions for everyone, but to her it’s all about passion.

“It could be anything. You could be a history geek or a car geek. I’m a huge football geek, soccer geek, and animal geek,” she said.

This year was the Geekie Awards first annual ceremony and it was hosted by Seth Green. Categories for awards include things like geeky crafts, web series, short films, and retail stores and websites, which is the category of Kelly and Kunin’s award.

“Just on an off chance I submitted the blog and we ended up being nominated. It feels really awesome,” Kelley said. She said that at first the event seemed small, but as the date for it approached, it gained more momentum.

“The event just blew up. All of these celebrities showed up and there was a red carpet thing we had to do… It’s a really big deal and we’re proud of it,” Kelley said excitedly.

Kelly and Kunin began the blog last November because, she said, “We sat around our house and, we would just talk about this stuff anyways, like comic books and video games, and just figured, maybe other people would want to talk about that with us or read what we had to say about it.”

Kelley and Kunin actually met at CSUN in an acting class, about six years ago, and have now been dating for three years. They had only been Facebook friends after their class until about three years ago when Kunin posted about needing help for a project, and Kelley came to the rescue.

“Her presence on stage demanded your attention. I think working with her really solidified not only her external beauty but the fact that she commands presence and that she draws you in. And she drew me in,” Kunin said.

Working together can be hard for some couples, and Kunin admitted that they both have strong ideas that end up competing against each other.

“We wouldn’t be where we are today if we didn’t have these strong ideas. We’re never butting heads but we’re feeding off of each other in order to be better ourselves and to make our work better,” he said.

Kunin also said that she’s always looking for the next big thing. Stephanie Bluestein, a professor of journalism at CSUN, met Kelly when she was a faculty advisor for Pierce’s newspaper in 2009.

“She was certainly one of the best students we had at Pierce,” she said, “She was always so upbeat and enthusiastic when she was working on the staff…very talented. As a professor, you can tell right away who has natural talent and Emily is definitely one of those students.”

Between that and her experience, Kelley is certainly armed with the tools to make an award-winning blog. She was on the Pierce Community College school newspaper for three years where she won about 30 awards through the actual school and then won several more awards at various conventions for the Journalism Association of Community Colleges.

Between work and school, it may seem to leave her little time to actually blog, but her enthusiasm for it seems to make that easier.

“I’ve been a journalist since high school… I really love to write,” she said. “Ultimately I would love to see the blog really take off and be kind of one of the leaders for that in the genre of geek community and I would love to just work for myself and do my own thing and have that blog.”