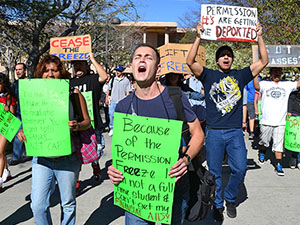 While CSUN may appear to be a generally quiet campus, a few decades ago, this was not the case. In the late 1960s, hundreds of students and faculty marched toward the administration buildings in hopes of establishing equal opportunities for minority students.

“November 4, 1968 there was a huge demand to get more black students on campus, students of color, Latinos as well,” Pan-African Studies professor Anthony Ratcliff said. “They wanted to have student classes with black students, black professors speaking with students.”

During that same time CSUN, formerly known as San Fernando Valley State College, became the talk of the town and the rest of the Los Angeles area due to the amount of student activism occurring on campus.

Much of this political activism arose because students felt the need to fight for and promote equal opportunity in higher education, protesting against racism and deprecating the Vietnam conflict, which was taking place.

Though many current students may not be aware of these events, it is because of them that CSUN made a name for itself as an active campus. Because of the conflicts that had taken place on campus involving negotiations between student groups and the school’s administration, CSUN was able to establish several of their largest most popular programs to date: Afro-American and Mexican American Studies, and the Pan-African and Chicano/a Studies Departments.

An article by the LA Times noted that from 1967 to 1971 most of CSUN’s activism took place. According to the article, there were six considerable student demonstrations where the Los Angeles policemen arrested 400 students and faculty members.

On Nov. 4, 1968, an event occurred in which members of the Black Student Union held 34 staff and administrators hostage by occupying the administration building. The BSU did this in an effort to urge former campus president, Dr. Paul Blomgren, to increase minority enrollment and staff, as well as to conduct a thorough investigation of racism complaints on campus.

“The administration didn’t listen to their demands, the administration here (at CSUN) didn’t respect that,” Ratcliff said. “At first they negotiated with them, but those students who left after negotiations were arrested.”

Because of this movement, police inhabited the campus for a week in hopes that no further uprising would occur. Two days later, as a result of the movement, 24 students were arrested and charged with conspiracy, assault, burglary, kidnapping and false imprisonment. Nearly a month later, a student set Blomgren’s office on fire.

As a result, Blomgren issued a message to the campus stating, “No group is justified in using force and the threat of force to settle questions on this campus. Any document (signed) when people are held hostage or force is being used is not a mutual agreement.”

Exactly a month later, another movement took place in which hundreds of students participated in a walk to the Administration Building in an effort to see Administrator Delmar Oviatt, who took over Blomgren’s position when he fell ill. However, the students were unsuccessful at the beginning of this movement when they were met by police at the entrance of the building. Eventually chaos ensued, fights erupted and arrests were made, yet, this didn’t stop students from being heard.

The following morning, 2,000 students gathered in front of the Administration Building causing Oviatt to declare a state of emergency. As a result, 286 students and faculty were arrested for unlawful assembly.

Subsequent to the events that took place the day before, the activism by students and faculty successfully established the creation of the Afro-American and Chicano Studies departments after negotiating with administration.

Students who wish to establish social change partake in student activism, as it is a strong force to be reckoned with. Much of the activism that occurred at CSUN can be viewed in the film “Storm at Valley State,” a documentary that captured the events on campus.

Though there has been much activism that in the past, just a few years ago in 2010 students partook in activism surrounding the California school budget cuts. Lately, there has not been too much activism taking place on campus.

“I think across the board, student activism is a lot less than it was in 2010,” Ratcliff said.

Ratcliff, who is also the Faculty Advisor of the Black Student Union program on campus, started his career in the Pan-African Studies Department in 2008. He further explained that since the event triggered by the 2010 the budget cuts, he’s noticed the lack of activism on campus.

“The identity of the Pan-African Studies Department prior to 2008 has shifted a lot due to the shift in the economy,” Ratcliff said. “It’s harder to get black students to recognize the need to take PAS courses and to learn about their culture and identity.”

Ratcliff went on to say that there is a difficulty in getting students to acknowledge long term issues such as mass incarceration in relation to economic exploitation.

“We’re trying to figure out how to get organizations like the BSU and M.E.Ch.A (Movimiento Estudiantil Chicano de Aztlan) to think about organizing and being active, and to be conscious of these issues,” Ratcliffe said.

Although as of late there has been a lack of activism, the BSU plans to take action in the near future.

“African American admission rates have been decreasing, so we’re seeing what we can do to boost that up,” BSU member Dawaun Lucas said. “We’ve been talking about going to different high schools and showing students what CSUN has to offer for the black community.”

Not only does the BSU plan to help increase the African American admission rates, but they’ve also been working with the Chicano/a organization, Hermanos, in effort to get to know one another.

Along with the establishment of the BSU, came the formation of the Chicana/o Studies Department in 1969. Students protested alongside BSU members in effort to raise awareness of the educational needs of Chicana/o students.

Dr. Rodolpho Acuña, who was voted by students and faculty as the founding member of the department, helped with the development of 45 courses to offer students. The courses consist of providing students with the awareness of social, political, cultural and economical issues in today’s society.

However, like the BSU, there hasn’t been much activism from the Chicana/o department as well.

“I got here in ‘69 and there was no Chicano studies department at the time, I was the first  faculty member, and we’ve had to fight with the administration every inch of the way,” Acuna said.

Acuña stressed that Chicano/Chicano Studies students should be speaking out and in the form of protest.