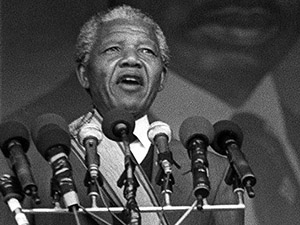 The world lost a revolutionary leader last Thursday. A leader who hoped to free his people from the tyranny of white racist rule. A leader who fought the law that created a racially separate, unequal, and unjust society for black Africans. A leader who suffered for years before experiencing the manifestation of his efforts and becoming the first black president in his country.

Nelson Mandela, the emancipator of South Africa from white minority rule, died at the age of 95. The cause of Mandela’s death has yet to be confirmed, however it is said that the former president was battling health issues, one of which was a lung infection that led to multiple hospitalizations, according to CNN.

“Mandela’s goal was to see a South Africa healed, a South Africa where the racial inequalities and discrimination of the past no longer plagued the country,” said CSUN political science professor Jennifer De Maio. “He believed in unity and in reconciliation. He wanted everyone, black, white, Asian and colored to come together and forge a new democratic South Africa together.”

Following the lead of many state and federal businesses and organizations within the country, CSUN honored Mandela by lowering the American flags on campus to half staff until Monday evening.

In an email distributed to the CSUN community, President Dianne Harrison wrote that Mandela’s “values and work have always aligned closely with the university’s mission” and asked students to join her in honoring his legacy.

Susan Kibrick, senior communication disorders and science major, said that she remembers how amazing Mandela was as a unifying leader and said that he set a precedent for the leaders that follow.

“We have to celebrate him because of all the work he did,” said Kibrick. “Unfortunately, it’s still very rare to see very influential leaders that can bridge so many opposing actions of society and that can inspire people to be better.”

In 1944 Mandela joined the African National Congress (ANC) and helped create the “Programme of Action,” which involved acts of radical civil disobedience, according to the Nelson Mandela Foundation.

Imprisoned at the age of 45 for treason and inciting strikes, Mandela spent 27 years in prison and was released at the age of 72 in 1990. Soon after, Mandela was named the first black president of South Africa and served one term.

Journalism professor David Blumenkrantz, who lived and worked in Kenya for three years, recalls the time Mandela visited the Kasarani Stadium, the largest stadium in Kenya, in July 1990.

“Mandela was waving to a euphoric crowd — an almost surreal moment, and everyone was so excited that he was finally free, and for Kenyans, that such a figure of liberation and African pride had come to their country,” Blumenkrantz said.

Mandela’s death has left many in his country and those around the world distraught, feeling the loss of a great leader. Thousands of South Africans and dozens of presidents, prime ministers and celebrities joined together in Johannesburg Tuesday to honor Mandela and pay their respects, according to CNN.

President Barack Obama went as far as to make a statement about Mandela from the White House, claiming that he achieved more than any man could be expected to.

“Through his fierce dignity and unbending will to sacrifice his own freedom for the freedom of others, Madiba (Mandela) transformed South Africa — and moved all of us,” Obama said. “His journey from a prisoner to a president embodied the promise that human beings — and countries — can change for the better.”

Though the leader is gone, his legacy and the goals that he fought so hard to accomplish will live on.

“We at CSUN can honor Mandela by remembering what he has demonstrated about the human capacity for forgiveness. Even when the greatest wrongs have been committed against us, we must forgive. And we must realize that often the only way forward is through reconciliation,” De Maio said. “One of the greatest legacies of Mandela is what he has taught us about conflict management. He has shown that there is another path besides violence and war. He has shown that it is possible to work alongside even our greatest enemies and to find a common dialogue.”