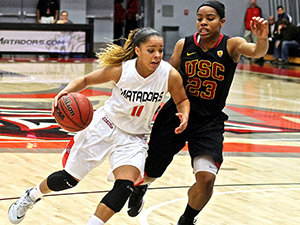 On the last play of the game with CSUN up by one, USC’s junior guard Ariya Crook dribbled into the lane and put up an airball. Junior forward Alexyz Vaioletama tried to tip it back in, but the ball rolled on the lip of the rim for what felt like hours before it popped out.

Junior guard Ashlee Guay led Northridge with 16 points, five rebounds and six assists while Sharpe had nine points and eight rebounds. Sophomore center Bernadette Fong had another strong outing off the bench, finishing with 10 points on 5-for-6 shooting.

The Trojans had three players in double figures led by Vaioletama with 21 points and 18 rebounds and Cassie Harberts with 18 points and 12 boards.

CSUN was up by five with a minute and half left in the game after Sharpe banked in a floater in the paint. But Crook made a layup and a 3-pointer to tie it at 64 with 32 seconds left.

Then Vaioletama fouled Sharpe in the backcourt, sending her to the free-throw line because USC was in the penalty.

Sharpe split the pair of free throws, giving the Matadors a one-point lead. On the next possession, USC turned the ball over, but CSUN kicked it out of bounds trying to retrieve it, which set up the final Trojan possession with 17 seconds to go.

“My blood pressure was rising,” said Fong, who had all of her points in the first half. “The whole bench, we could feel the anxiety, like we were on the court with them.”

The game was close throughout with 10 ties and 13 lead changes. Neither team led by more than six for the entire contest.

CSUN got off to a quick start, opening up a 9-3 lead with the help of two early USC turnovers. The Trojans got back into it with two back-to-back baskets, pulling them to within two.

Crook tied the game at 17 with a free throw after receiving an outlet pass from a teammate and scoring a layup in transition while getting fouled.

Later, freshman guard Emily Cole’s 3-pointer put the Matadors up 28-27, but Vaioletama answered back with a layup off a touch pass from Harberts, putting the Trojans up by one. Guay drained another CSUN shot from downtown, regaining the Northridge lead.

Even though the Trojans shot a blistering 54.2 percent from the field while the Matadors only shot 43.8, Northridge came away with a 35-33 lead at the half.

“We wanted to try to make them play a little faster than they normally do or that they wanted to,” head coach Jason Flowers said of his team’s defensive game plan.

Sharpe feels Tuesday’s win against a Pac-12 team with a winning record was a big step for the Matadors.

“This win was very important for us,” Sharpe said. “It boosted our confidence knowing that we won against a big team.”