Undocumented students and their allies urge CSUN for a resource center 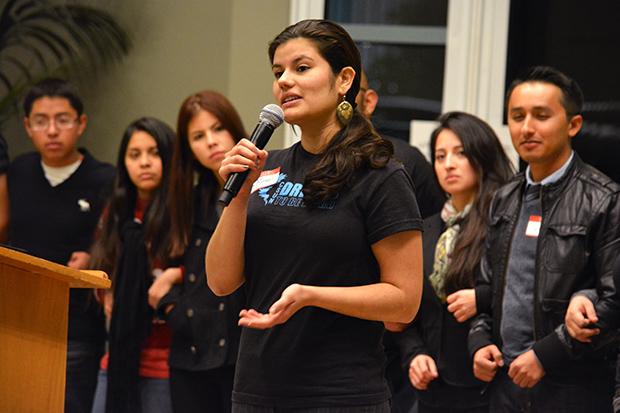 “We need a space where we can have access to resources including financial assistance, information about our mental health, and general information regarding laws, executive orders and legislative pieces that affect us directly,” said Ana Miriam Barragan, a double major in deaf studies and psychology, an undocumented student and member of DTBH.

“A (virtual center) will not be enough because the website will not offer any services regarding the mental health of students and it will not be an open space for students to feel comfortable to come out of the shadows and share their stories,” Barragan said. “In (an undocumented person’s) situation, moral support is important and we can only obtain it through (face-to-face) contact.”

The event which was held on Dec. 9 at the Grand Salon, was titled Call of Action, and is DTBH’s initial dialogue to bring awareness to others about the need of an undocumented resource center.

“We hope to work with faculty, staff, and students together, we are asking for administration to give us the same access to education. We all pay the same amount of money but undocumented students do not have the support or the resources to achieve their goals,” Barragan said.

According to DTBH, the Call of Action event was held not only to bring about awareness of issues facing undocumented individuals, but also to gauge the current amount of support from the CSUN community, support that DTBH said is needed to create positive change and a resource center for AB540 students.

AB540 was passed on Oct. 12, 2001, by then Gov. Gray Davis. According to this bill, undocumented students who meet certain requirements are allowed to pay the in-state tuition instead of out-of-state tuition in California community colleges, UCs and CSUs.

DTBH members said that despite the fact that the AB540 bill has been established since 2001, many students, faculty and staff are still ignorant or ill-informed about the bill.

Journalism professor and faculty advisor for DTBH, Jose Luis Benavides, said that it is unfair that Californians who are undocumented pay out-of state tuition.

“Undocumented students and the their families are contributing by paying taxes, the state of California is run by taxes, every time we buy goods, or just pay taxes to the state and there is no reason to treat [undocumented] people differently if they are paying the same tax,” Benavides said.

DTBH said that nationally there are 65,000 undocumented students that graduate high school each year and 23,000 of them graduated from a California high school and are looking to transfer to a college or university.

David Gonzales, 19, an economics major and an undocumented student, came to the U.S. when he was 9 years old. When he was 13 his dad was deported after he was found driving without a driver’s license.

That is when he found out what it truly meant to be undocumented in the U.S., Gonzalez said.

Like many undocumented individuals Gonzales said that he had to work while going to school.

“When I graduated from high school it was time to apply to the university. It was a hard process because no one was able to help me. I was accepted here at CSUN but I did not receive the Dream Act financial aid because I didn’t fill out the selective service form,” Gonzales said.

“That is why awareness about undocumented issues is so important.”

“In addition to regular struggles, AB540 students go through [different] stressors, this [stress] will have a toll on your well-being…one of the hardest things to do is to ask for help. There are a lot of reasons we don’t [ask for help]. Coming out [as undocumented] may have repercussions, [undocumented individuals] have to be careful with who they share information with.”

According to DTBH, a lot of students come to college misinformed and do not realize that DACA helps you get a social security number for work purposes only. Sometimes undocumented students  believe that they can use this number to fill out the Free Application for Federal Student Aid (FAFSA) but this is false. To apply for financial aid, undocumented students have to apply to the Dream Act. They do not qualify for FAFSA.

DTBH said that they still hear of administrators who, after over 10 years since its creation, still do not know what the AB540 stands for. The group urges that faculty and staff receive better training on application processes as well as the issues facing undocumented students.

“In my experience, outreach and communication are key elements that assist student groups in creating a productive dialogue around their ideas and to move forward with proposals such as the Dream Center,” said the associate vice president of student life, Shelley Ruelas. “At our last meeting, Ana Miriam and I, along with other students, faculty and staff, began to explore the process by which space allocations are considered on campus.”

DTBH’s long-term goal is to establish a resource center but because of the lengthy process, they had requested for an office space. Unfortunately, Ruelas said that there were currently no vacant offices.

“Next semester, we will continue to work with students and assist them in finding out how existing centers came to be here at CSUN, as well as how other campuses operate and support their programs and initiatives,” Ruelas said.

DTBH has been working closely with Associated Students (A.S.) to figure out a way to facilitate the process of creating a new resource center on campus.

“A.S. realizes that there is large group of students who are first-generation students and within that number there are a lot of students that fall under the AB540 category. That is why, as student representatives, we resonate with those issues that Dreams To Be Heard strives for and we are doing our best to work in collaboration with them to thoroughly research what it would take to create a center and that goes into funding, facility space, and the resources that it would offer. We also want to visit UCLA to see if we could translate their [Dream Center] to CSUN,” Associated Students vice president Talar Alexanian said.

While keeping in constant communication with Ruelas and Vice President for Student Affairs William Watkins, A.S. will be putting together a binder of information to formally present to the CSUN president and administration in January or February.

“I would definitely support having such a center and I think that the students are being informed about what they need to do. If you look at the Vet Center and the Pride center it’s a process and I hope that they will [follow through with] that because I think that it would be a very important edition to the campus,” CSUN president Dianne F. Harrison said.