Women’s Basketball: CSUN hangs on for 81-76 win over Cal Poly 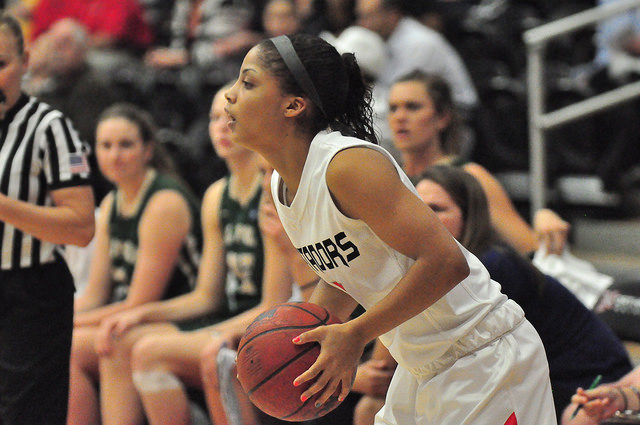 Entering halftime with a seven point lead, the Matadors appeared on their way to victory.  However, the Mustangs took a 59-58 lead with 10:52 left in the second half, setting the stage for an exciting finish that saw seven lead changes with CSUN securing their last lead with just over three minutes to go.

Junior guard Ashlee Guay led the Matadors with a game-high 22 points and seven assists, while both junior guard Cinnamon Lister and freshman guard Janae Sharpe contributed with double-digit scoring in the second half, finishing with 20 and 17 points, respectively.   Junior center Camille Mahlknecht held her own against Mustang standout senior center Molly Schlemer as Mahlknecht grabbed 12 rebounds and swatted a game-high five blocks.

Mahlknecht attributed her effort to her coaching staff’s game plan against Schlemer and the Cal Poly front court.

“Our coaches really focused on us boxing out and finding a body and I think that’s something everyone on the team did well tonight,” Mahlknecht said.

The Matadors and Mustangs played out to a 15-15 tie early in the first half, but CSUN pulled away with a 7-0 run to bring the lead to 22-15 with 11:52 to go on freshman guard Emily Cole’s second three pointer in as many tries.  The Matadors held on to a comfortable lead over the next ten minutes, as six different Matadors scored en route to a 40-34 advantage with under two minutes to play before the half.

A jump shot by the reigning Big West Player of the Year Schlemer would cut the deficit to four, but a Cal Poly turnover and a few Matador rebounds in the final minute of the half along with a jump shot and free throw from Sharpe would give CSUN a 43-36 lead going into halftime.

The lead would appear safe as CSUN cruised to a 56-49 lead with 15:32 to go in the second half.  However, the Matadors would fail to score over the next four minutes, allowing Cal Poly to catch up.  A Schlemer layup brought the Mustangs within two and junior guard Ariana Elegado hit one of her five three pointers to give the Mustangs a 59-58 lead.  The teams would exchange the lead with each of the next five baskets, with the Matadors finally scoring twice in a row as a Mahlknecht jump shot gave CSUN a 66-63 lead with 6:53 to go in the game.

A Sharpe jump shot would give the Matadors their final lead with 3:16 left, but Cal Poly stayed close as they drained a pair of free throws to come within one at 77-76 with just over a minute left.  Schlemer would have a chance to secure the potential game-deciding possession for her team with 30 seconds left when she blocked a shot and grabbed a rebound but immediately turned the ball over, which forced the Mustangs to foul the Matadors in the closing seconds.  Guay, Lister and Sharpe all made free throws to pad the lead and the Matadors clinched the 81-76 victory.

Coach Jason Flowers felt poor rebounding by his team allowed Cal Poly to make a run in the second half, but said the team came together with great individual efforts from Mahlknecht and the guards in rebounding and defense.

“We challenged the group late in the game and people stepped up,” Flowers said.

Although Guay, Lister and Mahlknecht all shot 50 percent or better to combine for 48 points, the Matador bench contributed 16 points to help CSUN reach its highest scoring total of the season.

“You can tell by the way we shot today everybody has been doing their part and shooting together as a team and on their own, and we were confident, we came in with a good mentality,” said Guay.
The Matadors, who now share second place with three other 2-1 teams in the Big West, will try and separate themselves from the pack as they travel to UC Santa Barbara for a Saturday afternoon game before returning home next Thursday to host UC Irvine.