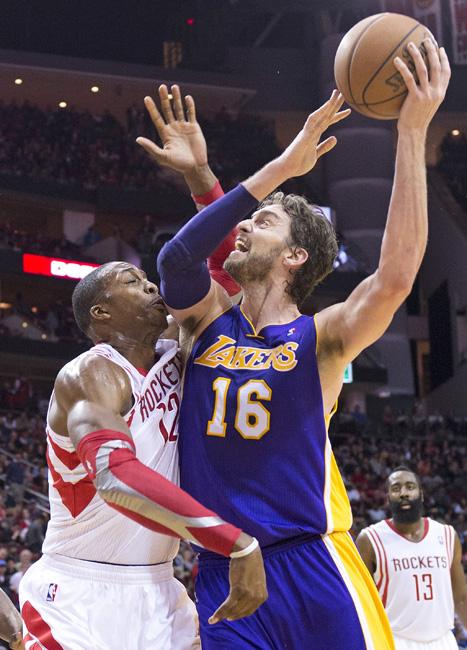 The 2013-2014 Los Angeles Lakers’ regular season hasn’t been the most satisfying of journeys for the team or its fan base. The season is halfway done and the fans’ reaction to a win or a loss has turned into nothing more than a collective shoulder shrug.

Lakers guard Nick Young, who grew up in the San Fernando Valley as a Lakers fan, understands the figurative pain the fan base has come to endure this season. After the team’s 123-87 loss to the Los Angeles Clippers on Jan. 10, Young pointed out how frustrating losing had become.

“It’s hard to be a Lakers fan, especially to see a game like the last one we played. It’s tough,” Young said last week to the L.A. Times.

AccuScore, which produces sports forecasting, projected a 36-46 record for the Lakers. At the time, 36 wins seemed a bit low for a team that was expecting to get a healthy Kobe Bryant in the lineup by the end of December.

As is the case so often in sports, things never go as planned. Injuries to Bryant and guards Steve Nash, Steve Blake, Jordan Farmar and Xavier Henry have created the most unlikely of situations for a franchise used to winning.

As a result of the injuries, the Lakers now have a starting lineup featuring former D-Leaguers Ryan Kelly and Kendall Marshall. A glance at the team’s depth chart is merely an exercise in futility. There just isn’t enough talent on the roster to survive in this league, let alone the highly competitive Western Conference.

So what is the point of this season?

The team is neither contending for a playoff spot, nor are they tanking. As difficult as it may be for some to grasp, there is a third option: night in and night out, this team competes. The team’s lack of talent has led to one silver lining: a group of guys that fight for everything they get. Compared to last year’s talent-heavy roster of prima donnas, having a competitive bunch should be refreshing to the fan base.

The roster is filled with guys on one-year contracts who want to prove their old teams wrong. Henry, Hill, Wesley Johnson and Marshall are all former lottery picks. What other team has four former top-14 picks that the average NBA fan has barely heard of?

Coach Mike D’Antoni has also turned Young, known for being a black hole on offense, into a team player. He is making the extra pass, something most viewers have never seen him do in previous years. He is properly rotating defensively and even sacrificing his body to draw the occasional charge. Young has averaged 17.1 points per game in a strong campaign for a Sixth Man of the Year award.

This team is the epitome of an underdog. Everyone loves rooting for the underdogs, except when they’re the Lakers. Fans in Los Angeles, or at least a majority of them, have never even imagined seeing their purple and gold fall down to the basement of the NBA. The team isn’t winning, there is no star power in the lineup to distract from the losses, and the Lakers’ only hope is disguised as a lottery pick in the 2014 NBA Draft.

Looking ahead, whether it be the No. 1 pick in the draft or climbing back up to contend for a playoff spot, nothing prevents one from enjoying the seemingly irrelevant positives such as Young’s contention for the sixth man award or Marshall’s consistent play of late at the point guard spot.

Rather than look to the banners in Staples Center as an affirmation that the Lakers will be back to their winning ways soon enough, or look to future drafts as an indication to where the team is headed, Lakers fans are better off rooting for their team compete. What happens as a result shouldn’t be a point of concern.  At least not yet.