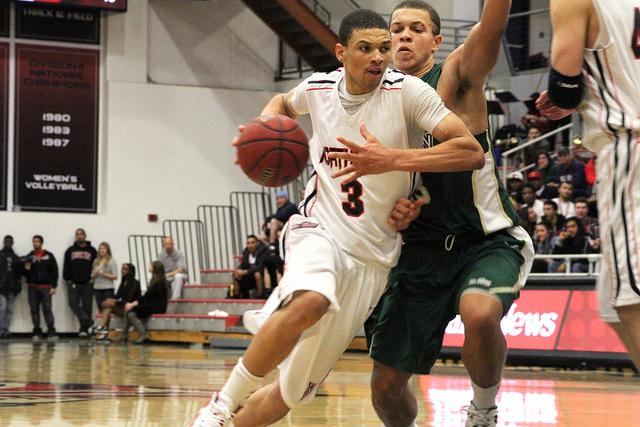 Although the game ended with Northridge trailing by 10, the Matadors stayed close and were down by just two points with a little over two minutes remaining in the game.

Junior guard Stephen Hicks led the team with 16 points and five rebounds. However, Hicks had a tough time only hitting three of his ten field goals, doing most of his damage from the free throw line where he was 10-for-12. Sophomore center Tre Hale-Edmerson finished with 13 points, eight rebounds and three steals while guard Josh Greene added 10 points and three assists.

Northridge had trouble containing Mustang senior guard Kyle Odister who hit four of Cal Poly’s nine three pointers. The Matadors could not get anything to go from three missing all eight of their attempts, their first game without a three point field goal since missing all ten of their attempts in a 100-54 loss at Cal Poly in Jan. 2012. The team also had a tough time getting any points from the bench with just three points, coming from freshman guard Aaron Parks.

The Matadors displayed great ball movement early on, but could not keep it going as they started to turn the ball over. Within the first six minutes, the Matadors had committed four turnovers.

Cal Poly took advantage by going on a 5-0 run and pushed their lead to as high as 10 to bring their lead to 11-21. Despite the Matadors having a tough time offensively, they managed to go on a 9-2 run to end the half and play some strong defense. At the end of the half, CSUN had eight turnovers with just one assist as Cal Poly lead 23-20.

Despite the offensive woes, coach Reggie Theus was satisfied with the defensive performance early on, as the Matadors held the Mustangs to just 36 percent from the floor in the first half.

“I thought we played as good defensively as we played all year in the first half,” Theus said in an interview with gomatadors.com.

Hicks came alive in the second half, as he hit back-to-back layups early in the half and later made a pair of free throws with under five minutes left to tie the game at 47 apiece. Although the team kept fighting, they could not get over the hump as Cal Poly made a play every time the Matadors got close.

Parks brought the Matadors within two points after he hit two free throws with 2:14 remaining in the game, but Cal Poly would not let the Matadors overcome the deficit as they drained a three pointer and knocked down clutch free throws to run away with the win, 62-52.

The Matadors will be back in action on Saturday as they host UC Santa Barbara at 7 p.m.