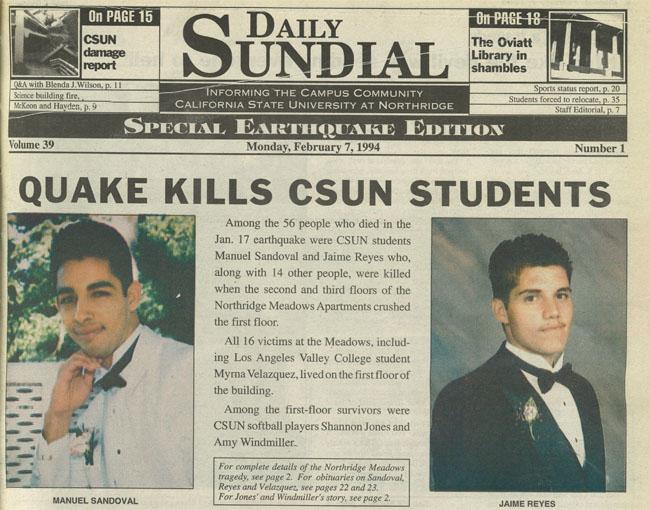 [soundcloud url=”https://api.soundcloud.com/tracks/129913423″ params=”color=990000&auto_play=false&show_artwork=true” width=”100%” height=”166″ iframe=”true” /]
The 1994 Northridge earthquake devastated the Cal State Northridge campus to the tune of $400 million in damage and a pair of tragic student deaths. The campus was closed for two weeks following the 6.7 magnitude disaster.

But what happened to the school newspaper when the school was closed?

Paul Bond and Steve Kozak, editor in chief and managing editor at the time, respectively, sat down with the Daily Sundial for a commemorative podcast. They discussed what it was like to be on staff in the immediate aftermath of the earthquake.

Bond and Kozak told stories of where they were when the earthquake hit, editorials they wrote, photos they shot and how they put together the first issue after the quake. The issue hit stands on Feb. 7, 1994, three weeks after the earthquake.

“After the earthquake happened, I drove into Cal State Northridge and witnessed freeways falling apart, people on edge thinking that bridges were going to collapse on them, and saw streets literally on fire,” Bond said during the interview.

That February issue was their first of the 1994 spring semester.