The art of chaos: CTVA professor and her students make a documentary about the Northridge earthquake 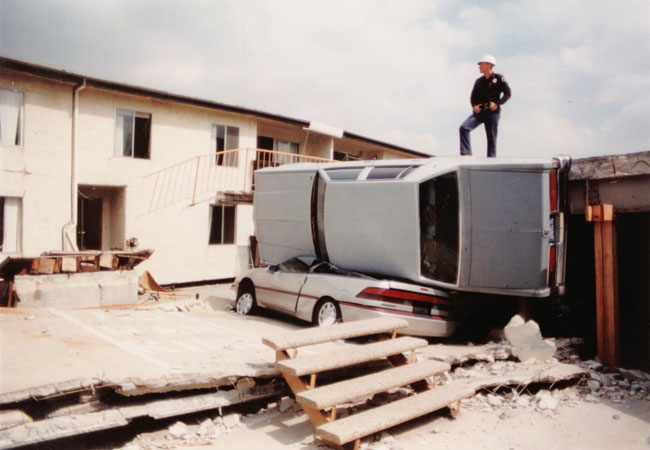 During the immediate aftermath of the devastating 1994 Northridge earthquake, which reduced much of the Cal State Northridge campus to rubble, one film professor and a large group of her students saw an opportunity to record history.

“I always think that it’s the responsibility of storytellers to capture moments in time,” said former CSUN student Glenn Gainor. “I thought it was a smart idea to try to be as much of a time capsule as we could because it generally impacted the Northridge community, obviously far more so than other communities since it was the epicenter.”

The result was a documentary titled “Epicenter U.,” which was directed and produced by cinema and television arts professor Alexis Krasilovsky. Several of her students, including Gainor, also worked on the movie as producers, directors and actors.

The film, which is available for checkout at the Oviatt Library, features footage of the wreckage at CSUN and interviews by students affected by the earthquake, including a student whose dorm was destroyed and another whose apartment was looted. Then-university president Blenda Wilson is also interviewed in the film, and former vice president Al Gore is shown giving a speech to the students.

William Malone, a former CSUN student, worked as a unit director on the documentary, a position in charge of filming supplementary footage, doing background work or working with the film’s extras.

Malone, whose Calabasas apartment was damaged as a result of the 6.7 shock, recalled the moment he felt the earthquake.

“The quake itself literally threw me out of bed,” Malone said.

Krasilovsky and her students could not use their usual film equipment to record the damage to the university because they could not access the building where the cameras were kept. Krasilovsky then gathered some cameras she had in her home and went to work with her students.

“Nothing was simple back then,” Gainor said. “You didn’t have video cameras as we do today. If it happened today, you’d be Instagramming it and putting it on social media.”

Krasilovsky, who narrates portions of the film, wanted to encourage her students to tell their own side of the earthquake experience.

“In many different ways — financial, emotional, creative — this earthquake touched us,” Krasilovsky said. “I was trying to orchestrate that by allowing students to have their own voices and then putting them together in some way that would be cohesive, where we’d see what the commonalities were.”

Krasilovsky was proud of the teamwork her students were able to show in spite of a lack of resources.

“I was amazed at the resilience of my students and the cooperation that most of my students had toward one another in trying to make a project together,” she said.

Gainor felt his involvement as a unit director in the documentary was more his duty as a filmmaker and hopes others can take something away from the film.

“It’s more of a responsibility to take part in something that you feel should be shared,” he said. “I think if anything, I look forward to looking back at those times and see what we can learn from those times.”

The documentary also showed the true extent of the damage done by the earthquake, including shots of piles of rubble, a mangled staircase, crumbled buildings and others.

The sometimes humorous segments done by the student filmmakers include one where two students dressed as cowboys have a fistfight. Another clip features students who are on the phone discussing a government conspiracy involving the magnitude of an earthquake and how the government pays for damages to affected structures.

Jan. 17 marks the 20th anniversary of the earthquake, and Krasilovsky feels more awareness should be brought to the 1994 earthquake as well as other disasters.

“It doesn’t hurt to talk about this stuff periodically,” Krasilovsky said. “Every 10 years or so, there should be another discussion. Maybe every five years just to make sure that people are prepared in the eventuality of an emergency like that.”

Krasilovsky said some good things came out of the tragedy, such as the construction of Manzanita Hall and other buildings.

“The campus is a whole lot better as a result of the earthquake,” Krasilovsky said.

Krasilovsky also feels the added attention to the event on that day could remind people what the campus and its students and faculty had to endure for it to be updated.

“Soon thereafter, I think people very quickly went into denial,” she said. “They just wanted to see pretty new buildings on the campus and didn’t want to have to think where did this come from and how did this come about.”

While Krasilovsky has gone on to make critically-acclaimed documentaries like “Pastriology” and “Women Behind the Camera,” she feels “Epicenter U.” helped mold the career she enjoys today.

“It certainly formed the base of a way of thinking that made some of my other projects possible,” Krasilovsky said. “A lot came out of the experience of working on the earthquake documentary.”

Gainor, now a studio executive at Screen Gems, a part of Sony Pictures, looked back fondly at his time making the film.

“The one thing I took away from that documentary was that somebody was smart enough to inspire us to tell a story,” Gainor said.