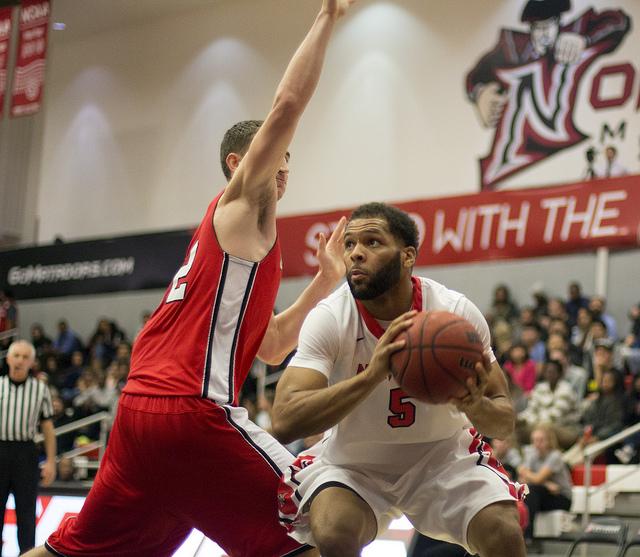 Halfway through coach Reggie Theus’ first season at CSUN, the Matadors have shown signs of improvement, but have still suffered growing pains with several close losses.

After a 5-5 start to their season, the Matadors took some time off to complete their fall finals and returned in late December with a hot start, winning three straight non-conference games.

The Matadors returned to action on December 20 with a thrilling 67-66 win over the Texas A&M – Corpus Christi Islanders (3-9). With 48 seconds remaining in the game, junior forward Stephen Maxwell dunked after receiving a pass from senior guard Josh Greene to put CSUN ahead by a point. The Islanders had a chance to win in the closing moments, but their last-second shot attempt came up short and the Matadors escaped Texas with a victory.

Returning home for the first time in over two weeks, the Matadors played an exciting game at the Matadome with a 79-69 win over the Idaho Vandals (6-7) on Dec. 22. Theus was satisfied with the win as his team filled up the stat sheet with all but one Matador scoring in the game. Theus marked the game as “the best all-around game we played this year” in an interview with Go Matadors.

CSUN won their third straight game when they defeated the Morgan State Bears (3-8) 86-80 on December 27 behind by a stellar game by Greene, who scored 28 points and added five rebounds and four assists.

However, CSUN’s winning streak was brought to a halt on Dec. 30 in Texas against a tough Stephen F. Austin (11-2) squad as the Matadors came up short, 74-67. Although the Matadors led for most of the game, the team missed important free throws down the stretch as the Lumberjacks went on a late run.

CSUN struggled to get back on track as they fell in another tight game in South Dakota (4-9), 76-75, on January 2. Trailing by 13 points at halftime, the Matadors fought back to grab an eight-point lead. However, Coyotes sophomore guard Trey Norris drained back-to-back 3-pointers along with a pair of free throws to put South Dakota ahead by one. Northridge missed two shots in the closing seconds to clinch the win for the Coyotes.

Theus was impressed with the way the team played in the second half despite the result.

“We are so close to being a very good basketball team,” Theus said in a postgame interview with Go Matadors. “It’s the little things, particularly down the stretch, that we need to finish games.”

After a brief flight delay out of the freezing midwest, the Matadors returned home and opened conference play with an easy 89-77 victory over the UC Davis Aggies (5-11, 0-1 Big West Conference) Jan. 9 at the Matadome.

CSUN held off the Hawai’i Rainbow Warriors at home two days later, winning another nail-biter 79-78 on Jan. 11. Maxwell again led the way with 24 points and 10 rebounds, his seventh double-double this season.

The Matadors suffered their first conference loss to the Cal Poly Mustangs (7-9, 3-0 Big West Conference) on Jan. 16.  Despite a strong defensive showing, the Matadors were plagued by turnovers and poor shooting, missing all eight of their 3-point attempts in the game.

Playing well at home, the Matadors need to improve their play on the road (1-7) if they want to stay above .500 and compete in a wide-open Big West Conference. CSUN will welcome the new semester with two home games, hosting the UC Irvine Anteaters, who lead the Big West, on Thursday and the Long Beach State 49ers on Saturday afternoon.