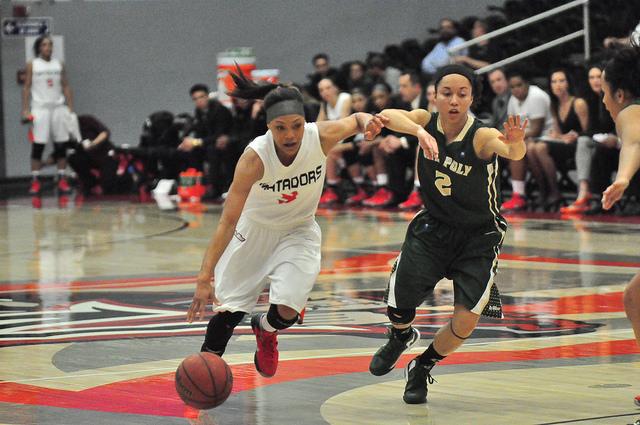 While CSUN was on break, the women’s basketball team was hitting the paint as they welcomed the new year with a new attitude, opening the year with competitive play on the road and at home.

The Matadors ended 2013 with a two-game losing skid, but opened up the new year with stronger play as they grabbed key victories at UC Davis and against Cal Poly, the defending Big West champions.

After solid victories at home against USC and Northern Arizona in December, the Matadors fell flat at home in a 72-60 loss against the Saint Mary’s Gaels on Dec. 21, followed by a blowout loss at Oregon on Dec. 29 96-61, despite forcing 23 Duck turnovers.

The Matadors turned their play around in 2014, despite losing to CSU Bakersfield at home on Jan. 2.  CSUN squandered a 13-point lead but pushed the Roadrunners to overtime, only losing on a last-minute layup.

A three-game slide was halted with the Matadors’ conference-opening victory at UC Davis 56-52 on Jan. 9, CSUN’s first win against the Aggies since 2005. The Matadors appeared in control early in the game but the Aggies wouldn’t go down easily, coming as close as a point in the second half.

Guay admitted the record was not her focus. She was only made aware of the record two weeks prior but was nonetheless honored and proud to be a part of CSUN history.

“It is both overwhelming and exciting at the same time” Guay said of her place in the record books.

A disappointing loss in Hawai’i followed the win at UC Davis. The Rainbow Wahine opened the game with a 15-0 run, and the Matadors were unable to recover. The Matadors outscored Hawai’i 44-39 for the rest of the game, but the initial run proved too much for the CSUN, as they fell 54-44.

The Matadors bounced back with an impressive win against the first-place Cal Poly Mustangs at home on Jan. 16, scoring a season-high 81 points. The conference home opener saw four ties and nine lead changes, until CSUN held on with three minutes left. The Mustangs battled to come within a point at 77-76 but gave away a chance to win with a costly turnover in the final 30 seconds.

Junior guard Cinnamon Lister went 7-12 from the field and reached the 20-point mark for the sixth time this season. Lister was also responsible for a free throw to put away the Mustangs in the closing seconds of CSUN’s victory.

Lister said she will continue trying to score in bunches, but emphasized the importance of finding her teammates for scoring opportunities.

“Letting my teammates draw players and take away my [defender] makes scoring easier for me and everyone else,” Lister said.

The Matadors hope to build on the success of their early conference wins, as they continue their charge into conference play.

Head Coach Jason Flowers was glad with his team’s improved play as of late, but emphasized his players would be taking the schedule one game at a time and not begin to look ahead.

“We don’t talk about streaks, we don’t talk about this or that, it’s a matter of trying to get better every single day, every practice, every weight workout, every film session,” Flowers said following the Cal Poly victory.

The Matadors have 14 conference games remaining, before wrapping up their season at the Long Beach State 49ers on March 6. The Matadors also have a rematch at defending conference champions Cal Poly on Feb. 13.