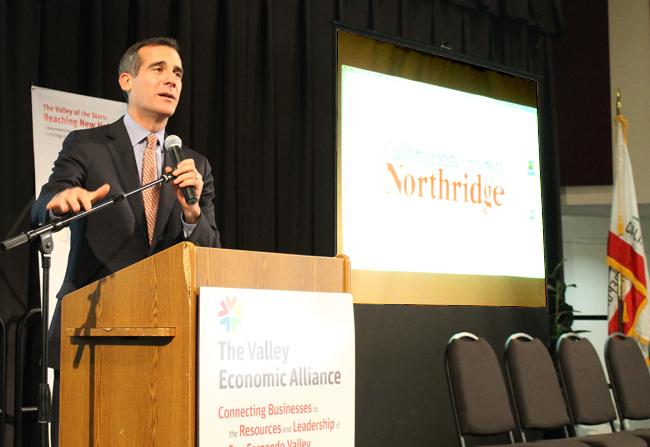 Los Angeles Mayor Eric Garcetti came to speak at a luncheon commemorating the 20th anniversary of the Northridge Center on Jan. 17, 2013 in Northridge, Calif.

Los Angeles Mayor Eric Garcetti was among multiple dignitaries, as well as current and past elected officials, to visit CSUN for a commemorative event Friday in honor of the 20th anniversary of the 1994 Northridge earthquake.

The Valley Economic Alliance, the organization created in direct response to the earthquake, assembled the event called The Valley of the Stars: Reaching New Heights.

The event offered workshops, exhibitors and a luncheon. Five free workshops were available for attendees and covered such topics as preparing technology for the next big quake and how to survive power outages.

More than two dozen exhibitors from various companies, including Costco, Legal Shield, the Los Angeles Fire Department and Microsoft, were present at the event.

Garcetti, who welcomed everyone to the event, spoke of his ties to the area and said people must take action for when the next big earthquake hits.

“I was born in 1971, two weeks before the ‘71 quake, and my mother, when I was growing up always said, ‘That was just to welcome you to the San Fernando Valley,’” Garcetti said. “The ‘71 quake and the ‘94 quake… We all know that this isn’t a question of if, but a question of when.”

Zev Yaroslavsky, member of the Los Angeles Board of Supervisors, said the fact that the earthquake happened in the early morning made a difference in terms of faculty and student casualties as a result of the parking structure collapse. The situation would have been much worse had the quake occurred in the afternoon, when many students and teachers would probably be walking to their cars, Yaroslavsky assumed.

“Let’s not fool ourselves on this issue,” Yaroslavsky said. “We are not really prepared as we think we are for a 4:31 p.m. earthquake. We have never been through one in our lifetimes.”

Although much of the event was geared toward businesses, many of the presenters and exhibitors offered advice on how students and faculty can better prepare themselves in the event of an emergency.

Loretta Brazil, the emergency preparedness coordinator for the Los Angeles Department of Water & Power, described what items should be in an emergency supply kit, particularly for those living in the dormitories, and she encouraged attendees to help prepare friends as well.

“Try to have extra bottled water, crank flashlights — so you don’t have to worry about finding batteries — an extra blanket for if the temperature drops, and food that has a long shelf life and ones that have a lot of protein, like nuts and peanut butter,” Brazil said.

She also spoke about the importance of taking CPR and first aid courses, listing the Red Cross and the fire department as two places that offer such classes.

Juan Carlos Lopez, the community outreach coordinator for the Red Cross, gave advice on how often to check emergency kits and a good time to do so. He said a kit should be in three places: in the car, at home and at the office.

“We recommend checking your kit twice a year,” Lopez said. “A great time to do it is during daylight savings, when you have to change the clocks back anyway. Medicine expires, water expires, food expires.”

Carlos said to have foods that bring comfort and for those with children, to have a stuffed animal or favorite toy to help distract them from what is going on.