Men’s Basketball: Matadors give up lead, game to UCSB at home, 79-69 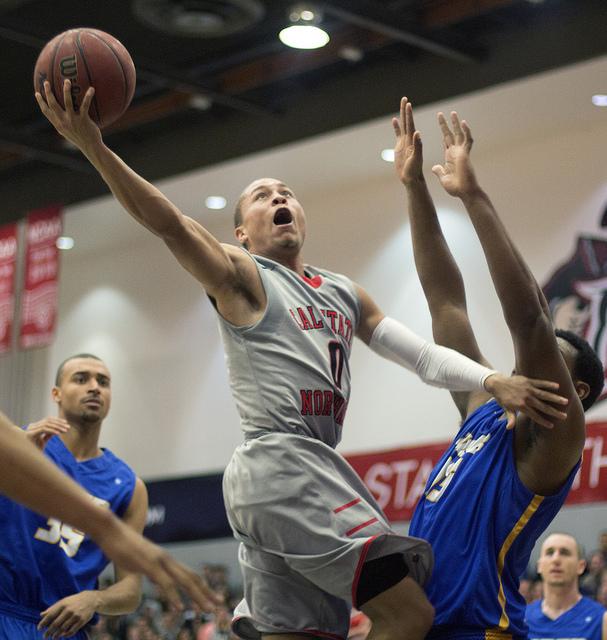 Senior guard Josh Greene led the Matadors with 27 points and made all 12 of his free throws. Junior forward Stephen Maxwell chipped in a double-double with 18 points and 10 rebounds.

Junior center Alan Williams led the way for the Gauchos with 16 points while sophomore guard Michael Bryson scored 15 points and went 3-for-5 from the 3-point line.

CSUN started off slow and went down 9-2 after they gave up three early 3-pointers to the Gauchos. Santa Barbara stretched their first-half to lead 10 after senior guard Kyle Boswell completed a four-point play on a 3-pointer and a free throw.

The Gauchos blitzed the Matadors with a 13-3 run midway through the half, punctuated by a 3-point shot from junior guard Zalmico Harmon with the shot clock winding down. He was also fouled on the play, and the made free throw gave Santa Barbara a 22-12 lead.

CSUN bounced back to end the half. Two free throws by Greene ignited an 8-2 push that ended with freshman guard Aaron Parks lobbing a pass to Maxwell, who threw down a dunk just before the halftime buzzer. The score was 34-28 at the break, in favor of Santa Barbara.

Coach Reggie Theus felt his team needed to pick up their game in the final 20 minutes.

CSUN started the second half on fire when Maxwell cut to the basket and threw down a vicious dunk, cutting the Gaucho lead to four. Then Greene completed a four-point play of his own, tying the game at 36.

Maxwell rebounded a missed shot and laid the ball in while getting fouled, giving the Matadors their first lead of the game. The ensuing free throw put CSUN up 39-36, completing an 11-2 run in just over two minutes.

“We played our game,” Greene said about the stretch that gave CSUN the lead. “We were just getting stops on defense and then we were just running our stuff and getting the ball in the paint inside and out and just being the aggressors on both ends.”

But almost as fast as it came, Northridge’s lead went. Santa Barbara went on a 13-0 run, giving them a 49-39 lead. CSUN got as close as six when junior guard/forward Stephan Hicks converted a layup in transition. But the Gauchos rallied back with seven straight points and never looked back.

“When the game was on the line, we didn’t make the tough plays, the physical plays that needed to be made,” Theus said.

CSUN had a rough night from the field, shooting an anemic 36.8 percent for the game compared to Santa Barbara’s 51.9 percent.

“We played pretty hard, but… we can’t win shooting 37 percent,” Maxwell said. “We missed a lot of shots, especially in the paint.”

Theus said his team struggled scoring around the basket because of UCSB’s size down low.

“We knew that length would be a problem and ultimately, I think that was the most significant part of the game,” Theus said.

Greene doesn’t feel his team’s lack of size should be used as an excuse for not winning games.

The Matadors will head on the road next week to face the UC Irvine Anteaters on Thursday and the Long Beach State 49ers on Saturday.