Say no to apathy and just protest 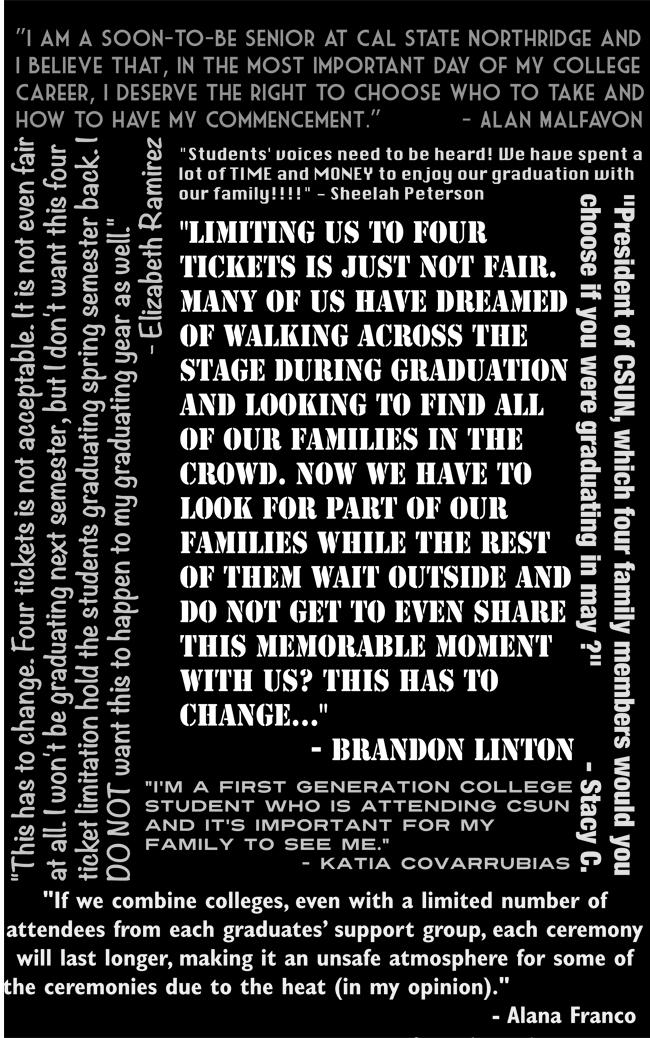 Over the winter 1,566 students signed a petition voicing their dissatisfaction with the recent 2014 graduation changes.

CSUN students will fight for what they believe is wrong. In a leap of faith, students took to protesting instead of quietly sitting.

The strongest presence was on an online petition site, Change.org. Students voiced their opinions about only being able to choose four family members to watch them receive their diploma and about the combined graduation ceremonies. But this past winter, AS met with administration and together they reached a compromise.

Students will be allowed to request seven tickets and colleges with more than 1,000 students will have separate ceremonies. Some colleges will remain combined and parking passes are still limited to two per graduate.

But the thing to take away from all this is students made a difference. Our generation made a difference. The generations before us complain that we don’t speak loudly enough, that we just let things happen without much concern. This is proof that we won’t take things lying down.

Prior to graduation, students showed their willingness to tackle an important issue. In 2009, when faculty furloughs hit CSUN, students marched in protest of the furloughs and further budget cuts. They were making sure that their voices were going to be heard in Sacramento. Students packed the corners of Nordhoff Street and Reseda Boulevard chanting, “No more prisons, no more wars, schools is what we are fighting for” and “furloughs, hell no.”

CSUN has a history of activism. From establishing various reputable ethnic studies programs to the Black Student Union and Vietnam War protests, students on this campus have fought for their rights and the rights of others.

Another big student movement was the Occupy CSUN movement, which sought to bring attention to the 2011 Wall Street bailouts. In this movement, a handful of CSUN students took to replicating the Occupy Wall Street movement.

Since then, students have shown that they are willing to do whatever it takes to spark change.

When graduation was drastically changed to a ticketed format, students felt that they needed to say something. They wanted more people to see them accomplish their dream of graduating from this fine institution. They wanted their dream graduation day.

We don’t just whine when we don’t get things to go our way. AS had the maturity and forethought to know that a compromise had to be made.

We couldn’t keep things the way they were because other nearby schools such as UCLA and Cal State LA have ticketed ceremonies. Eventually, CSUN would have followed the trend.

For this reason, AS knew they couldn’t demand that graduation return to being an open ceremony. They compromised and now the graduation situation is better. While not perfect, I am glad that our voices were heard.

Props go to administration for listening to the students and being able to compromise on this issue. The students’ complaints did not fall on deaf ears. Administration knew that the student body was not happy with the changes and, together with AS, they made a compromise.

This is a great example of positive change through the mutual cooperation of the administration and the people they serve. While ticketed graduation ceremonies are a minor problem to some in the grand scope of society, a meaningful lesson can be drawn. This is how government should work — listening to the people who have elected them to serve the public, and then cooperating for the better of both parties.

This might be a precursor of things to come. Maybe we will return to the heavier activist past of the 60’s and 70’s. This gives us hope and optimism for future generations not only on this campus but in general. CSU’s and CSUN in particular have a reputation of being commuter schools with not much going on between classes. But if we stand up and demand change or reach a compromise, good things can happen. Let’s put our voices out there and drown out the noise that challenges our well-being.