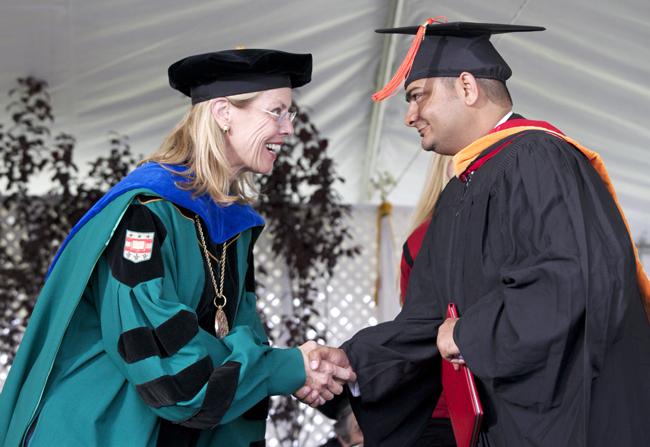 CSUN graduates will now be allowed to request seven tickets instead of four to invite guests to their commencement ceremonies in May after a decision was reached by university officials in December of last year.

In addition, one day was added to the commencement schedule in order to separate some of the individual college ceremonies.

Members of CSUN’s Associated Students (AS) held a meeting over winter break with President Dianne F. Harrison and William Watkins, vice president of student affairs, to discuss concerns raised by students last semester.  Students were upset about a change in the commencement ceremonies that limited graduates to four guest tickets and combined ceremonies for the colleges.

“We thought the best way to go into the meeting was not to say, ‘Don’t change anything,’ because we didn’t feel a lot of results would come from that,” said Chris Woolett, president of AS. “We thought if we could find a good compromise that allowed students to have more tickets, it would be extremely helpful.”

The updated commencement schedule added a ceremony on Wednesday, May 21. Woolett said Harrison agreed to skip a scheduled CSU Board of Trustees meeting in order to attend the additional ceremony.

AS proposed the idea of adding an extra commencement day and separating the colleges. Woolett said the majority of their proposed changes were implemented.

“I think that this is one of our biggest wins that we’ve had in AS for a long time,” Woolett said. “To be able to collaborate and put in this much work and really to present a very good document that wasn’t full of demands, but full of compromise. That allowed the administration to work with us, which was great for us.”

Four of the largest colleges will receive their own commencement ceremony as a result of the change, including undergraduates of the College of Social and Behavioral Sciences and the Mike Curb College of Arts, Media and Communication. Watkins said those colleges have about 1,000 more graduating students than the others.

Woolett said he watched YouTube videos to find out how long last year’s commencement ceremonies were. The longest ceremony lasted 2 hours and 40 minutes without speeches, according to his research. The AS plan said all the ceremonies would average 1 hour and 40 minutes, which would allow more time for speeches, Woolett said.

During the winter-break meeting, Woolett and Talar Alexanian, vice president of AS, brought to light an online petition onChange.org started by Danielle Yehuda, 22, senior psychology major. Comments featured on the site were from current and former students, family members of students, and community members. The petition seemed to attempt to get the attention of Harrison specifically.

“This petition will be brought to the president of CSUN and we will show her that we have a voice and that something needs to be done about the commencement changes,” Yehuda said on the petition’s website.

The petition was able to reach close to 1,600 signatures and was closed when administration made a change to the commencement ceremonies.

“It was really interesting because I’ve never really involved myself in anything like this before,” Yehuda said. “When I started the petition, I thought this would be a great way to get the word out. I was very excited to hear that just by a few changes we made, just by starting a petition, it had made such an impact. I was very happy that I got the support from my fellow students and when I found out I was just ecstatic.”

Leftover tickets will be available to graduates who need more than seven.

“We think that there will be, in some instances, for some of these ceremonies, that not all students will need seven tickets and they won’t ask for them,” Watkins said. “So we’re going to make those tickets available for students who want more.”

Serena Sanders, 22, junior music industry studies major, likes the increase in tickets, but said she does not need seven.

“For me, [seven tickets] is more than enough,” Sanders said. “Just having my family and close friends coming is fine, but that might be different for other people who have larger families and a larger social group that might be cramping it. It’s definitely better than four.”

Watkins added that the procedure for handling ticket overflow is yet to be worked out.

One aspect of the commencement ceremonies that will not change is the number of parking passes given to graduating students. They will still receive two, even with the increased number of guest tickets.

Anne Glavin, CSUN chief of police, told the Daily Sundial in November that she fully supports a ticketing system for commencement ceremonies. She feels the increase in tickets does not change much in regards to safety.

“Adding the number of tickets from four to seven won’t impact that dynamic of the crowd size because we’ve added an additional day as well, which will spread out the crowd over the period,” Glavin said.

Watkins said there will be 10,500 seats available on the Oviatt Lawn for the graduation ceremony, up from 9,200 seats last year.

“When you have that many people in a space together, you really want to provide a seat for them,”  Watkins said. “We think that the public safety concerns will be significantly addressed by having seats, and students agreed with that.”

Woolett feels that the change to graduation ceremonies was a win for the students and was encouraged by their activism.

“I am just very happy with all the work the students put in and continuing to put their voice out,” Woolett said. “I can’t say enough of how important it is for students to say how they feel about things. That is the biggest thing for us. If we could hear that more, we would love to.”