Students can earn points, prizes for exercising at SRC 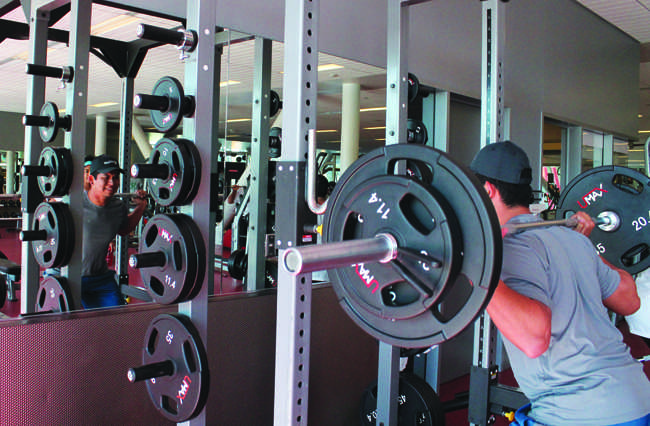 Students, like senior Jose Gonzlez, can earn prizes while working out at the SRC

During its second year of operation, the SRC introduced the New Year, New You program to incentivize student exercise.

Students will be able to earn points and prizes by keeping a record of their fitness activity throughout the semester. Eligible activities include group exercise classes, the rock climbing wall and open-recreation activities.

New Year, New You began on Jan. 21. Students can register online through the SRC website. For every activity completed activity members can earn stickers on their “passport,” or point card. There are two phases. The first phase takes 12 stickers to complete and is called Take Action.

The second phase is called Strive for More and that requires 24 stickers to complete. In addition, a grand prize raffle of 20 free personal training sessions will be held in April. Students need to complete the phases and turn in their passports, or point cards, to track their progress, by April 13.

“The program is designed to help our membership make smart and healthy new year’s resolutions and help them to achieve those resolutions,” Francis said. “Students can register online and get issued a passport. The passport has a place to write your resolution. As students participate they accrue these stamps to win various prizes along the way to keep them motivated.”

Last March, a new outdoor turf field expanded the SRC, in addition to boosting intramural participation.
“We have also seen an increase in open recreation time with just people playing on the field enjoying themselves,” Francis said. “It provides an opportunity to complement what happens inside the SRC outside now.”

Michal Jankowski, the manager of facility operations, said he has seen an increase in clubs using the SRC and groups renting the field for special events.

“Last year, around 12,000 people used the field, there’s open recreation on the field including intramurals,” Jankowski said. “It is very popular, we get more and more requests to use the field.”

On average, between 2,100 and 3,900 members use the SRC on weekdays. Jankowski said some of the most popular areas of the facility include the open-recreational zone, the basketball courts, group exercise classes, the top-floor running track and the rock wall.

Kevin Kaminyar, senior psychology major, agreed that playing basketball is one of the more popular activities at the SRC.
“Running around the track is too systematic,” Kaminyar said. “With basketball you are able to work out more muscles.”

The SRC will host a large-scale event called Matador Recreation Day on Thursday, Feb. 20. Information, food and music will be provided to CSUN students in the SRC.