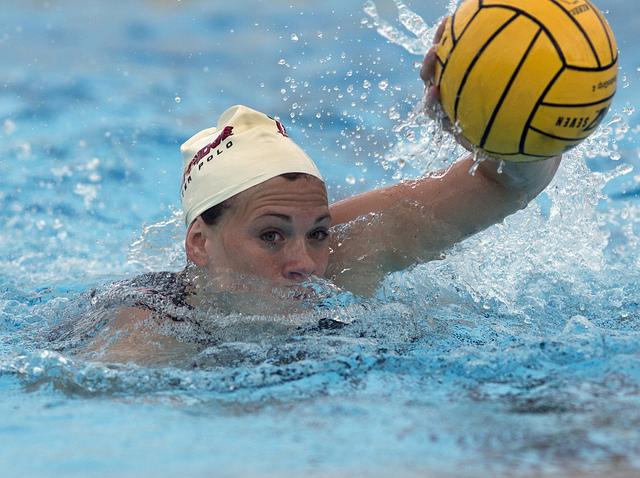 Despite their success in recent years, the Matadors will look to earn their first Big West conference title this season. Photo Credit: Trevor Stamp / Daily Sundial

The women’s water polo team is gearing up to make a run at their first Big West Championship with a core of strong upperclassmen. Since the program’s inception in 2002, the Matadors have built a tradition of success including consistent national rankings, multiple All-American athletes and high academic performance.

“We set standards for our own program that I feel either match or are higher than other standards that are being set,” said fifth-year head coach Dr. Marcelo Leonardi. “I think that the culture of the program now sustains that excellence.”

Winning is a proven tradition for this team with four of the past five seasons ending with 20 or more wins. The current lineup looks to continue the tradition as they set their sights on winning the Big West Championship and reaching the NCAA tournament.

Leonardi believes his team is poised to do well and that they’re prepared in all areas of the game.

The majority of last year’s 23-game winning offense is returning and the expectations are high.  Players have said they feel prepared to meet those expectations.

“I think I’m a lot more confident this year than I was going into last year, just because of having the team I’ve had,” said senior attacker and All-American Lindsy Nelson. “The girls in my senior class have been around me my entire career.”

Eight double-digit scorers return this season as well as junior goalkeeper Kiernan Davis, who enters her second season as a starter. Leonardi believes she will be one of many breakout players on the team this year.

“Kiernan Davis in the cage, having a full year as a starter and a year as a backup as a freshman, now knows what it takes to be an impact player and I think she’s going to be key for us to make a run,” Leonardi said.

Despite a stacked roster, the Matadors’ path to success will not be an easy one. Conference rival UC Irvine has set the bar high in the Big West, as the Anteaters have won the conference championship four of the past five seasons.

Last season’s matches with the Anteaters were competitive, but CSUN lost 6-4 despite a hat trick from junior center Marisa Young. Leonardi said the team will use UC Irvine as their “measuring stick” in conference play.

A trio of seniors will help lead the charge for CSUN, including utility player Jenny Jamison (45 goals), center Molly Henehan (35 goals) and defender Melissa Doll (26 goals). Nelson stressed the fact that regardless of seniority, all players are expected to be leaders.

Junior defender Kelcie Ferreira (43 goals) and Young (50 goals) are the second tier of upperclassmen leadership being groomed by Leonardi. It is the experience and support they bring that will help boost the seniors in order to take this team to the next level.  Ferreira lead the team in steals last season and was second on the team with 45 assists.

Junior attacker Katie Kammer (19 goals), who helped in many key situations last season, is expected to see more time in the water and has been noted as a potential breakout star by both her teammates and Leonardi.  Freshman defender Alexis Elias is also expected to add an explosive boost to the defense.  The Arroyo Grande High School recruit came in during the fall and has improved quickly with what teammate Davis called “a huge jump” in the spring.

Junior attacker Mckenzy Fowler, a transfer from Arizona State, and junior utility player Kelcie Barott, a transfer from Colorado State, are both expected to make significant contributions to the Matadors immediately.

With a plethora of talent, the team has stepped up their off-season preparations for what they expect to be a banner year.

“I think our coach is pushing a little bit harder this year than any other year because he knows what kind of potential we have,” said Nelson. “Our potential this year with how many girls we have, we’re kind of stacked, so we do a lot more in practice and he is on this fast track train and we have to get on the train with him.”

Leonardi mentioned that the biggest challenge for his team would be to “stay hungry” in times where the team may get complacent.

“Since our schedule is long, I feel that we’ll have peaks and valleys, and when we have those small valleys, it’s getting through those injury-free while still maintain[ing] that hunger to pursue that common goal,” Leonardi said.

That common goal does not end when the final whistle blows and everyone gets out of the water. Leonardi stresses academic success and life after polo just as much as success in the pool. He says it starts with recruiting and being able to find athletes that know the balance of also being a student.

From their freshman year, players under Leonardi are embedded in a culture that promotes academic success, and the results have spoken for themselves as the team earned a fall team grade point average of 3.27.

The season will kick off with a tournament beginning Saturday at UC Santa Barbara, where the team will be challenged immediately with matches against the Pacific Tigers and the powerhouse UCLA Bruins.

History and tradition have set the stage and the team chemistry is right for a run at a Big West Championship in 2014.