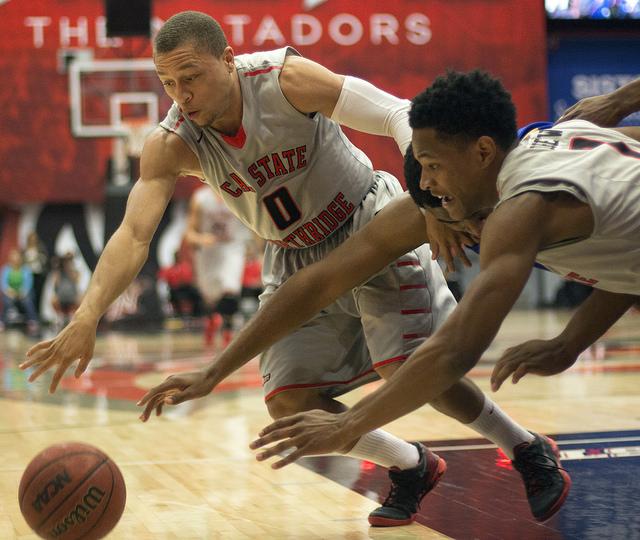 Having dropped their last two Big West Conference games, the Matadors (10-10, 2-3 Big West) looked to get back on track against a tough opponent in UC Irvine (13-7, 4-0 Big West) but came up short, losing 72-67 at the Bren Events Center. The loss brings the Matadors’ losing streak to three games.

Cal State Northridge struggled to get shots to go down throughout the game, primarily in the first half where they shot only 26.5 percent from the field. The Matadors would trail by as much as 16 points in the game before bringing UC Irvine’s lead down to as little as three points with under two minutes remaining in the game.

“Aaron was 7-for-9 from the free throw line and that was big for us. Fourteen points in 17 minutes is very solid,” Theus said in an interview with Go Matadors.

CSUN got off to a good start in the first few minutes of the game with sophomore guard Landon Drew hitting a three-pointer and Maxwell battling for an offensive rebound before knocking down a jump shot to bring the score to 5-0. However, things turned around quickly as the UC Irvine Anteaters went on a 16-0 run to lead 22-7 with 11:36 remaining in the first half.

Despite a big run from UC Irvine, CSUN was able to finish the first half only down by seven, trailing at 36-29.

The Matadors had a tough time containing freshman center Mamadou Ndiaye, who had five of his seven blocks in the second half and finished the game with 10 points, making all five of his field goal attempts to go along with 10 rebounds. Ndiaye, a 7-foot-6 center from Dakar, Senegal, is the tallest active collegiate basketball player.

With 1:54 remaining in the game, CSUN would cut the Anteater’s lead to just three points after Maxwell grabbed an offensive rebound that was followed by a Matador jump shot to bring the score to 63-60.

The Anteaters would get hot from the charity stripe down the stretch as their final seven shots at the free throw line kept their six point lead intact en route to their 72-66 victory.  Although UC Irvine did not shoot well from the 3-point line, they made nine 3-pointers while the Matadors would only hit two throughout the game.

Coach Theus was disappointed with the team’s shooting percentage, which was 34.9 percent when the game finished.

“We had our chances,” Theus said in an interview with Go Matadors.

On Saturday, the team will be back in action when they take on the Long Beach State 49ers on the road and look to get their conference record back to .500.