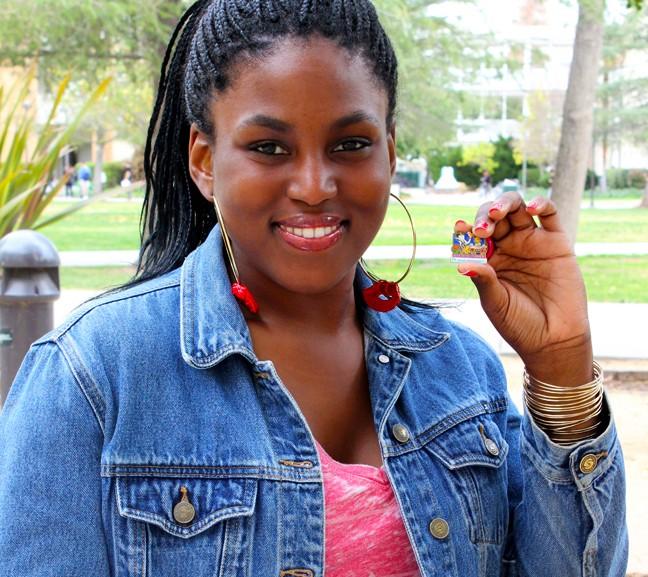 Precious Malumfashi, 26, shows the pin she received for participating on the Festival of Roses Parade on Jan. 1.

CSUN communications student Precious Malumfashi, 26, was not only born premature at 24 weeks, but was diagnosed with cerebral palsy disorder soon thereafter. Malumfashi was kept in an incubator and stayed hospitalized for three months at a Kaiser Permanente hospital in Woodland Hills.

It was unknown what condition she had until she was 2 years old.  Cerebral palsy:  a disorder that affects the nervous system and is not genetic. Sometimes seen in premature babies it is caused by the lack of oxygen reaching the brain. The disorder has affected Malumfashi’s ability to walk from a very young age.

Malumfashi has inspired and helped others by sharing her story.

“I don’t have a disability I have a ‘handi-capability,’” Malumfashi said. “I can do anything anybody else can do. I just do it differently.”

Malumfashi’s mother, Lori Malumfashi, was given little hope on the condition of her daughter. Doctors could not predict how Malumfashi would be the next day and instead fought hour by hour to keep her alive.

Three months after being released from the hospital, doctors were unsure of what disorder she had. Malumfashi could not be diagnosed with anything since she was still developing. Doctors told Malumfashi’s mother that her brain would not develop more than a 5-year-old.

Despite what doctors said, her family never gave up on helping her build a stronger nervous system. Her mother refused to allow her daughter to become part of that statistic.

Growing up, Malumfashi felt like the rest of the kids. She would play with her cousins and despite feeling like sometimes there was something different about herself, her family always treated her like any other normal child. Malumfashi remembers whenever she would fall, her grandmother would worry and run to her rescue, but it would be her mother that said she could get up on her own.

Aside from attending various physical therapies to improve her physical state, Malumfashi has had three major corrective surgeries on her legs. Two surgeries have consisted of electric shocks to her nerves. She also had metal fasteners in her feet to keep them from going out to the sides. Ultimately, her surgeries have helped her form a better stride, walk and posture.

She has overcome a lot of physical and emotional pain. Malumfashi is a role model for her younger sister and a piece of hope for parents who have children with disabilities and are given little hope.

This year, Kaiser had a float named “First Steps to Total Health” in the annual Rose Parade. The float specially held individuals who have taken the steps to have a better and healthier lifestyle. A representative from the communications department at Kaiser asked Malumfashi if she was interested in being one of the people considered to ride the float.

Malumfashi was told in October that she was chosen to be one of the individuals to ride the float. She was joined with her pediatrician and his wife. She said it was an experience would never forget.

“I had never seen so many people, a sea of people,” Malumfashi said.

Aside from riding on the float, she was able to help decorate it. She even conducted interviews with news organizations, such as KTLA. On New Year’s, day she rode on the float for almost three hours, waving and smiling.

She had never imagined she would participate in the Rose Parade. But her life has always taught her to be strong and to never give up.

“Whatever talent you have make it your own and always find a yes,” Malumfashi said.