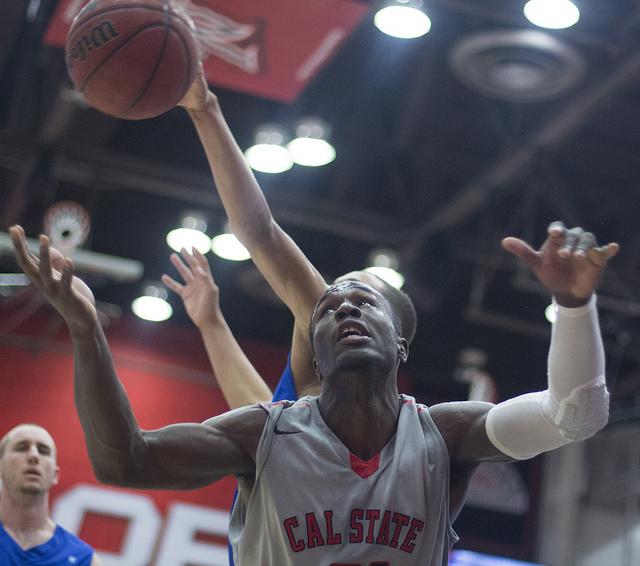 Despite out-rebounding the 49ers 39-37, the Matadors gave up 18-second chance points on 12 offensive boards by Long Beach State.

Long Beach State was able to follow the lead of junior guard Mike Caffey who led all scorers with 23 points, as the 49ers clinched their third conference victory.

Head coach Reggie Theus explained his team’s failure by describing the building blocks of success it takes to win at a high level of competition.

The 49ers torched the Matadors with easy buckets inside by scoring 48 of their 76 points in the paint.

The Matadors started strong as they held an early lead at 17-10 with 11:39 left in the first half.  A dunk by junior forward Stephen Maxwell broke a 10-10 tie, beginning CSUN’s run.

However, the Matadors inconsistent play plagued them as they surrendered their lead in just over four minutes, as the 49ers’ LaSalle McKay knocked down a three, his only bucket of the game, to tie the score at 26 with 7:12 to go in the half.

The game remained close with the Matadors holding a one point lead as late as the 11:21 mark of the second half.  However, the 49ers shut down Cal State Northridge as they pushed their lead to 13 with just over two minutes remaining, keeping the Matadors out of reach.

Junior guard/forward Stephan Hicks led the Matadors in scoring with 17 points, six rebounds,  and three steals against the 49ers.

Maxwell’s 14 points gave him 1,010 for his career, becoming just the 18th player in school history to reach the 1,000 point mark.  According to Go Matadors, teammates senior guard Josh Greene and junior guard/forward Stephen Hicks both eclipsed the 1,000-career point plateau earlier this year.

The Matadors have now lost four straight games, all of them by double digits. With 11 games still remaining, a conference title is still well in sight. CSUN sits tied for fourth place and only three games back in the loss column to the UC Irvine Anteaters (4-1).

The team will return home Thursday Jan. 30 to face UC Riverside before going back on the road for two games against Hawai’i and the UC Irvine Anteaters.