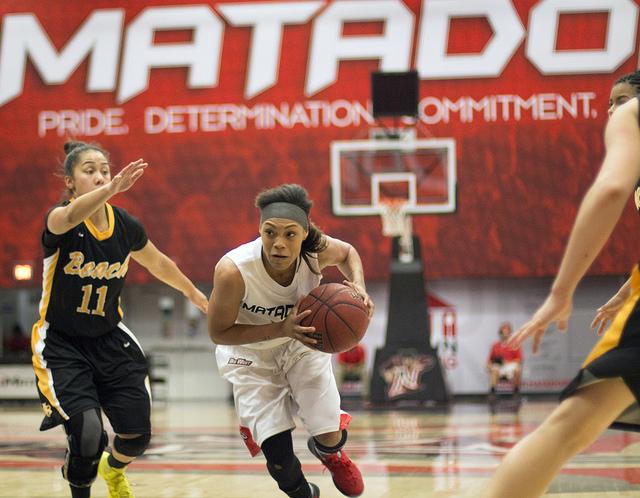 Winning the opening tip-off, Cal State Northridge started with a layup from junior guard Janae Sharpe, establishing a game-long lead that was widened beyond Long Beach State’s reach in the second half.

“We needed to make sure that we stayed in our offense and played our game instead of breaking down to their defenses,” said Guay.

At the end of the first half CSUN held a seven-point lead but surrendered nine steals and 12 turnovers to Long Beach.

“In the first half we were kind of making a lot of turnovers.” said junior guard Cinnamon Lister, who leads the Matadors in scoring this season.

Long Beach State junior guard Lauren Spargo sank a three-pointer at the 11:03 mark of the first half only to be returned on the next play by Northridge’s Guay to extend the lead to ten.  Guay led the game with 21 points.

Northridge gave up a total of 19 turnovers to Long Beach State. Despite swiping 10 steals, the 49ers were unable to close the gap and fell into a deficit during the last 10 minutes of the second half they were unable to catch up.

“We picked up our rebounding this game which was very important,” said Guay.

In Thursday’s loss against UC Irvine, Northridge’s 14 rebounds and three steals in the second half weren’t enough secure a win.

Coming in with 18 points, including 10 from free throws, Sharpe stayed close behind Guay in scoring. Long Beach State freshman forward Madison Montgomery was the 49ers’ top scorer with 10 points.

CSUN’s next game is at the UC Riverside Highlanders on Jan. 30. Riverside sits last at 0-6 in the Big West  Conference.

“Our performance has been ok,” said Lister. “But we have to stay consistent and get another win on the road.”

Concerning the conference game against Riverside, Flowers said that the Matadors are prepared for the road game.
“They’re a well-coached team on offense, they’re going to run motion, they’re going to set a lot of screens,” said Flowers. “It’s going to be a challenge.”